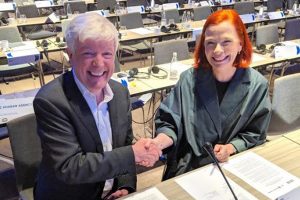 Canadian public broadcaster CBC has struck a “creative partnership” agreement with UK counterpart the BBC that will see the organisations working together more across genres including drama and factual programming.

The BBC and the CBC signed a letter of intent “to working together to enhance the services and programmes we bring to audiences” with a focus on scripted, news, current affairs and factual output, as well as radio shows.

The broadcasters have previously coproduced shows such as scripted duo Torchwood and Doctor Who, as well as documentary Takaya: Lone Wolf, but are being squeezed by the growing dominance of global streamers. Last month CBC revealed it had struck a co-development and co-production deal with Australian pubcaster the ABC.

This latest agreement was made between BBC chief Tony Hall and CBC president and CEO Catherine Tait at the 82nd General Assembly of the European Broadcasting Union in Norway last week.

In a joint statement, the duo said: “As we reinvent how we deliver our services for new generations, we are coming together to share ideas, and our teams are exploring new ways to work together: amplifying our public service missions, bringing our audiences the best ideas, and investing in our local creative industries.

“In an increasingly global marketplace, Canadian and British audiences want programmes and services about their lives and their culture.

“In divided times, it’s never been more important to reflect and represent every part of our diverse communities. And in a world where disinformation spreads in a flash, we need public media to bring the whole of society the news and analysis that it can trust – what is really going on and why it matters.”