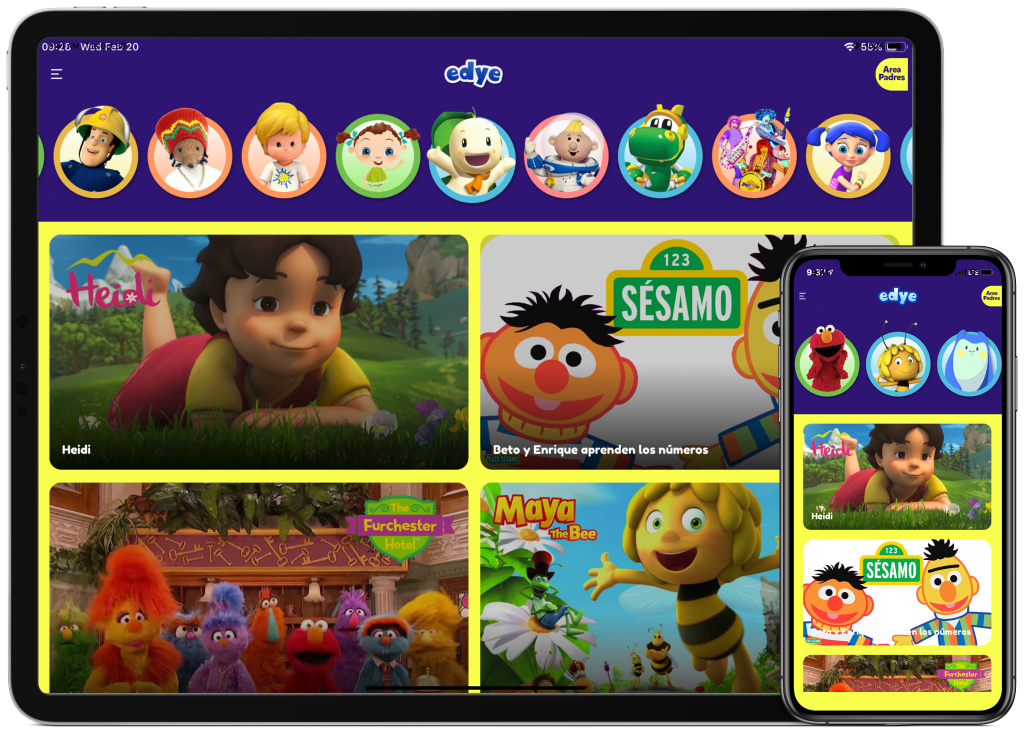 HITN, the Spanish-language network that offers educational and entertainment content across the US, has struck a pact with Sesame Workshop which will become a primary provider of content for its new SVOD, Edye.

Edye’s content offering includes seasons three and four of The Furchester Hotel, a series set in a cheerfully chaotic inn run by a close-knit family of monsters.

A co-production of Sesame Workshop and the BBC’s CBeebies, the show aims to strengthen children’s problem-solving skills.

In addition to The Furchester Hotel and a range of other short-format Sesame Workshop content, the new digital platform offers educational guides for parents, as well as a wide variety of videos, games and children’s books, all in Spanish.

“We are very excited to include Sesame Workshop’s content in the launch of our new SVOD preschool service Edye.  We have been carefully handpicking every single title that will be featured at the launch of our service and having Sesame Workshop content is a shining example of that effort. Their programs combine high entertainment and educational values, presented by well-known characters that are very close to the hearts of both, children and parents”, said Erika Vogt-Lowell, director of programming and acquisitions for HITN.

Simon’s Cat, the illustrated series featuring the mischievous cat and his owner Simon, is now available on TikTok, offering short video animations around the world.

Simon’s Cat, who has an established social media presence with nearly 5m subscribers on YouTube and 1.5m followers on Instagram, is also releasing a new film, a four-part special: Simon’s Cat – Missing Cat.

“We are honoured to have these two renowned brands and outstanding content creators on our platform, they complement perfectly our vast and diversified family-friendly content whilst providing positive inspiration for our users around the world,” said Joanna Touqmatchi, TikTok’s UK community manager.

Wim Ponnet, chief commercial and strategy officer at Endemol Shine Group added: “TikTok offers us a great opportunity to engage with new audiences around the world through the vertical short-video format. Although our Mr Bean and Simon’s Cat channels are relatively new, we are seeing great traction on the platform and a really positive response from fans.”

Beano Studios is teaming up with award-winning production company Selladoor to create an all new musical stage production based on hit TV show Dennis & Gnasher: Unleashed!.

The family friendly show, which is being developed by Selladoor – the company behind hits including Madagascar the Musical and Avenue Q – will launch in 2020 on a year-long tour of 40 plus theatres and venues across the UK and Ireland.

BAFTA-winning writer/producer-director Will Brenton is on board to write the show which will feature Dennis and Gnasher’s hallmark slapstick comedy and ageless humour delivered with a repertoire of songs.

The stage production follows on from the success of Beano Studios’ international Emmy-nominated TV series Dennis & Gnasher: Unleashed! The TV show stars Beano’s irrepressible hero Dennis (voiced by Freddie Fox), his dogged side kick Gnasher and fearless mates including Rubi, JJ, Pieface and his pet potato Paul. Together they cook up crazy plans, get in all sorts of scrapes and take on every challenge, no matter how big.

The hit TV show recently secured its second series (52 x 11’) on CBBC and has been sold in over 24 countries and airs on the biggest broadcasters including Super RTL in Germany, Rai in Italy and France Télévision to name a few.

Emma Scott, CEO of Beano Studios said: “Following the success of Dennis & Gnasher Unleashed around the world, bringing our gang to life on stage is the perfect next step. Selladoor are the ideal team to take on the exciting challenge of bringing the iconic characters to life in a show to entertain all ages.”