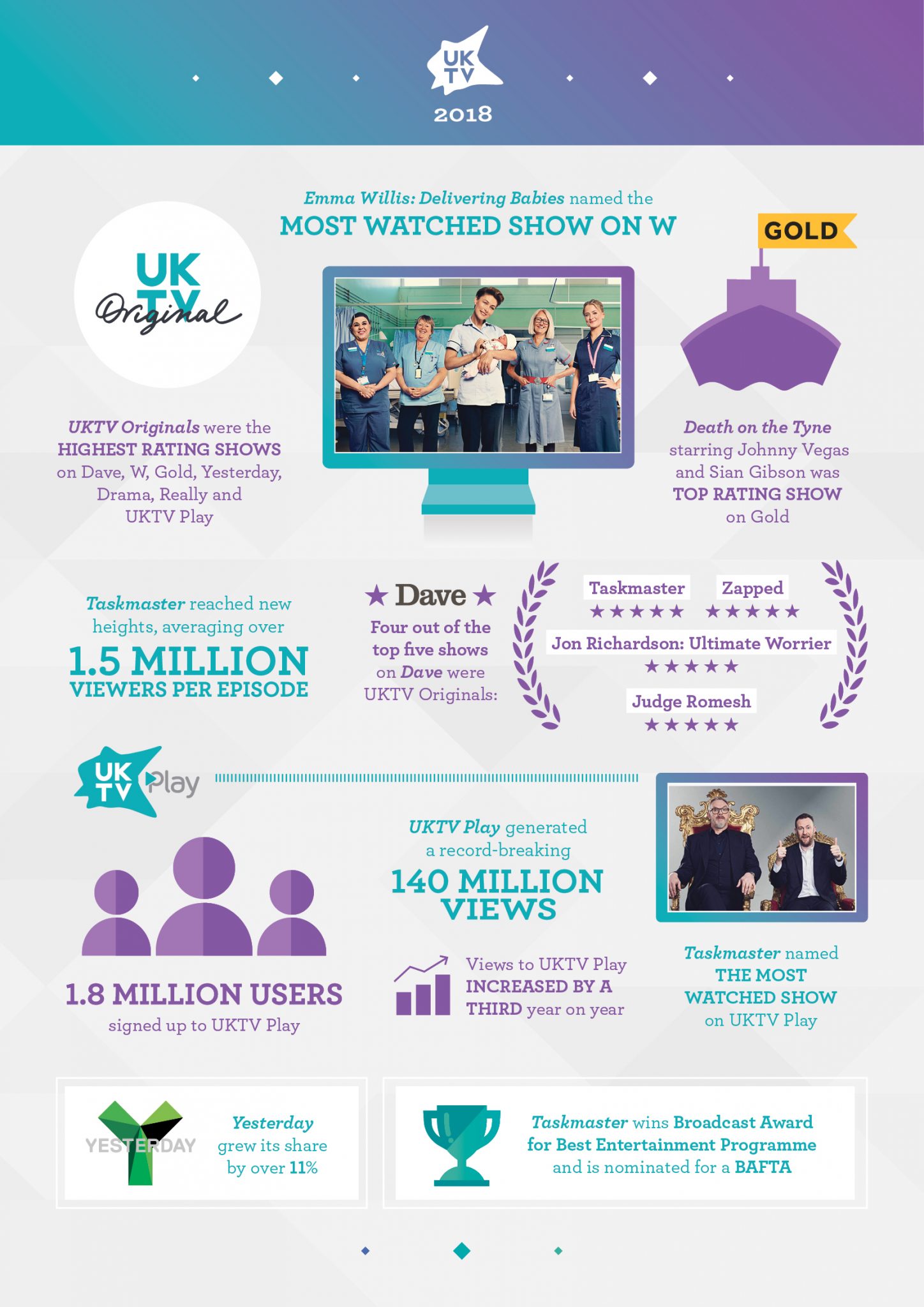 Views on the platform have grown by 36% since 2017. In addition, UKTV’s introduction of mandatory registration has pushed its user uptake with 1.8m signing up in 2018, a third of whom are aged 16-34.

UKTV Originals were the most popular shows on UKTV Play with episodes of Taskmaster, Judge Romesh and Jon Richardson: Ultimate Worrier taking the top three spots.

The titles appealed to a younger demographic. A sum of 69% of registered viewers who watched Taskmaster were aged 16-34, with Judge Romesh drawing in 45% and Jon Richardson: Ultimate Worrier gaining 63%.

Originals win big for the network

UKTV Originals became the most-watched shows across six of UKTV’s channels in 2018, with Taskmaster topping the list at Dave, Emma Willis: Delivering Babies doing so at W, Death on the Tyne drawing the biggest audience at Gold, Murder on the Blackpool Express doing so at Drama, Abandoned Engineering for Yesterday and Inside the Ambulance for Really.

On Dave, UKTV’s biggest commissioning channel, four out of the top five shows were UKTV Originals – Taskmaster, Jon Richardson: Ultimate Worrier, Judge Romesh and Zapped. Taskmaster was also the most popular show across the network with the most recent series (seven) becoming the most successful to date, with an average of 1.5 million viewers per episode.

W’s commissioning strategy continues to mature and new UKTV Original, Emma Willis: Delivering Babies, was the most watched show on the channel in 2018 reaching 753,000 viewers. It was followed by Inside the Ambulance which continues to attract a high number of viewers 386,000 for series three and 359,000 for series four.

All network data was produced by BARB.

Darren Childs, UKTV CEO, said: “Our strategy of creating distinctive, ambitious and compelling new shows is continuing to pay off. I’m incredibly proud that for the first time, UKTV Originals were the top rating shows on  six of UKTV’s channels and on UKTV Play last year. The breadth and depth of our channels offer a rich mix of opportunities for advertisers, and UKTV Play, which generated over 140 million views and attracted 1.8 million registered users in 2018, provides a data rich environment for targeted advertising.”