Teletoon is set to premiere four new kids’ titles that will launch up to the end of the year. 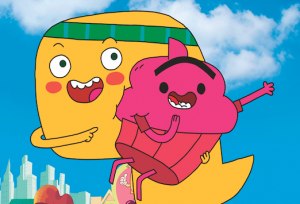 Each new title is a Canadian-made original. Cupcake & Dino: General Services (pictured) is a toon that will follow the larger-than-life antics of Cupcake, a pastry with a Napoleon complex, and his fun-loving brother Dino. The title will premiere on September 3.

The digital-first series Bravest Warriors will also launch on September 3. Produced by Corus Entertainment’s Nelvana, and created by Adventure Time’s Pendleton Ward, the animated comedy set in the far future follows the adventures of teenage heroes-for-hire as they warp through the universe to save adorable aliens using the power of their emotions.

Action-packed series Chop Chop Ninja kicks off on October 6. The new show packs some serious punch as Iro, an exuberant young ninja, along with his three friends – fellow classmates at the Ninja Academy – protect his island home from a steady onslaught of treacherous and not so treacherous villains, in hopes of proving that he deserves the legendary title of Chop Chop Ninja.

“Corus’ ongoing dedication to producing world-class animated content is driven by our outstanding production partners whose passion, talent, and creativity consistently delight Teletoon viewers with a perfect blend of our country’s humour and heart.”