Temple Street, a division of Boat Rocker Studios, has secured the rights to internationally bestselling novel The Biggest Modern Woman in the World, by Susan Swan. 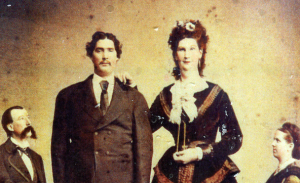 Originally published in 1983, and now a contemporary classic, the novel tells the extraordinary true story of a seven-foot-six giantess. Swan’s title has been published in 15 countries and translated into eight languages.

It will be adapted for television by Hannah Moscovitch, an award winning playwright, radio, film and television dramatist who has risen to international prominence with works such as This is War, The Russian Play and East of Berlin.

Boat Rocker Rights will control the worldwide rights to the title.

“Ultimately it is an unlikely story of triumph over adversity which will resonate deeply with audiences worldwide. We’re delighted that we have one of the strongest voices in Canada, the multiple award-winning Hannah Moscovitch, to adapt the series.”

Swan said: “This novel is very close to my heart and I’m thrilled that the television series will be created by Temple Street and Hannah.  It’s the ideal dream team to bring Anna Swan’s incredible true story to life!”