The life of legendary US music producer, arranger, composer and songwriter Quincy Jones will be the subject of a new Netflix documentary set to air next month. 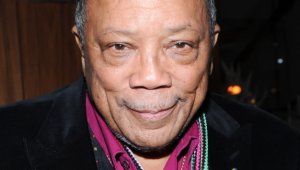 The documentary, Quincy, has been directed by Jones’ daughter, the actress Rashida Jones, along with Alan Hicks and will air on Netflix on September 21 following a limited theatrical run.

Described as an “intimate look into the life of icon Quincy Jones,” the film threads personal vérité moments with private archival footage “to reveal a legendary life like no other.”

It is produced by Paula DuPré Pesmen and executive produced by Jane Rosenthal and Berry Welsh from Tribeca Productions and Adam Fell from Quincy Jones Productions.

Jones has worked with just about every major entertainment figure in the past 60 years, from Frank Sinatra and Burt Bacharach to Michael Jackson and Will Smith. He started as a session musician, became a band leader and arranger, produced countless pop hits and composed scores for a number of successful films.

His greatest success was as producer of Michael Jackson’s first three studio albums, the second of which, Thriller, remains the biggest selling record of all time. He is also the most Grammy nominated artist of all time.

“It’s rare that somebody who has lived as much life as my dad is still interested in growing and knowing the next generation,” Rashida Jones says. “He is such a man of action and accomplishments, but we were so lucky to spend real time with him, to let him reflect on life and the larger picture. I feel honored to be able to share that with audiences all over the world.”

Hicks said: “There is really no one like Quincy, the sheer breadth of his work alone is unparalleled, but the story of him as a man has never been comprehensively told. It was a privilege to have his trust, allowing us to capture intimate moments giving insight into the fabric of the man.”