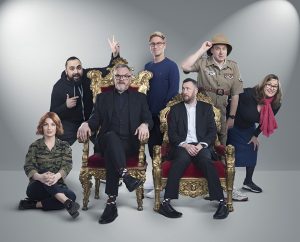 Ten UKTV channels  have gone dark for four million Virgin Media customers in the UK as a dispute between the companies continues.

The chief executive of UKTV has issued a statement expressing the producer’s disappointment at Virgin Media’s decision to remove the channels from its pay-TV platform.

Dave, Alibi, Drama and Gold were among the ten channels to leave the Virgin EPG last week. In addition to removing channels, thousands of hours of on-demand entertainment have also been blocked off from Virgin subscribers.

“We’re hugely disappointed for the many customers who are losing out because our channels are no longer available through Virgin Media,” said Darren Childs, chief executive of UKTV.

“We completely understand their frustration and would love to continue to bring them the shows and channels that they’re so passionate about, but we need a fair price to support our growing investment in programmes. The reality is that we just can’t accept the drastic price cut that Virgin wants.”

The row reached a head last week when Virgin confirmed that it would replace UKTV’s channels slots with alternative channels. In addition to Dave, the Alibi, Gold, W, Eden, Good Food, Yesterday, Drama, Really and Home channels have been taken off Virgin.

According to UKTV, it stems from Virgin’s demand the UKTV accept a ‘huge cut’ in its channel fees. Contrasting that with recent increases in Virgin’s subscription fees, UKTV has gone public to explain fully its objections to Virgin’s demands.

“- It is unreasonable to ask UKTV to pay to be part of a product that Virgin Media sells to customers.

– Virgin Media don’t offer a TV package to customers without some kind of subscription fee. In effect, they want UKTV to subside their business by paying to be part of a product that they sell for a minimum of £29 a month.

– Virgin customers can continue to watch our free channels without subscription on Freeview and Freesat.”

Childs went on to stay that UKTV remained “Completely committed to our viewers and appreciate the thousands of messages of support that we have received. We will continue to serve our viewers through our many platform partners.”

Last week, Virgin Media blamed the spat on “restrictions put on UKTV by the BBC,” claiming that the broadcaster – which is a joint venture between BBC Studios and Discovery – is “not able to provide the significant on-demand programming that we know our customers want.”