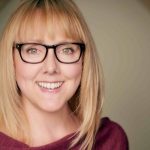 Gaumont has expanded its animation & family division, promoting Terry Kalagian to SVP, and appointing Kimberly Dennison (right) to the newly created role of VP of creative development in the US office.

Dennison joins from Walt Disney TV Animation, where she served as director, development across both original and Disney-branded properties. In her new role at Gaumont, Dennison will work alongside Gaelle Guiny, who is VP of creative development, France.

The new appointment follows on from recent news that several high-profile properties are in development as animated series and theatrical features, said Gaumont President of Animation & Family Nicolas Atlan: “Since joining Gaumont in March 2016, we have been actively pursuing a whole range of compelling and engaging animation projects that will become part of the Gaumont heritage.”

Gaumont projects in development include Touch The Earth and Heal The Earth from Julian Lennon and Bart Davis; creator, writer, and illustrator Stan Sakai’s comic book series Usagi Yojimbo; Molly and the Cryptos, with France Television;  Bionic Max, with Gulli; and The Star Shards Chronicles, based on the YA novels by Neal Shusterman. Projects in development for theatrical release include the animated feature High in the Clouds, based on the book authored by Sir Paul McCartney and Philip Ardagh and illustrated by Geoff Dunbar.