Entertainment brands such as Netflix have aided a 21% growth in brand value to $748 billion for 2018, according to Brand Z – Kantar Millward Brown’s brand equity platform.

Netflix is one of the biggest contributors to growth, climbing 31 places from last year to 61st place in Brand Z’s top 100 list. The platform has grown 73% in brand value from 2017 to $20.8 billion.

Other brands said to be growing this value include Google, Apple and Amazon. YouTube, 51st on the list, grew 37% in brand value to $23 billion, for example, while Amazon jumped up by 79%.

Alibaba is another fast riser on the list, growing by 92%, which Brand Z puts down to the brand strengthening its media and entertainment ecosystem. It has secured its position by becoming the largest distributor of Disney animations in Asia.

Google and Apple’s foray in entertainment has also kept them firmly in first and second place on the list, respectively. 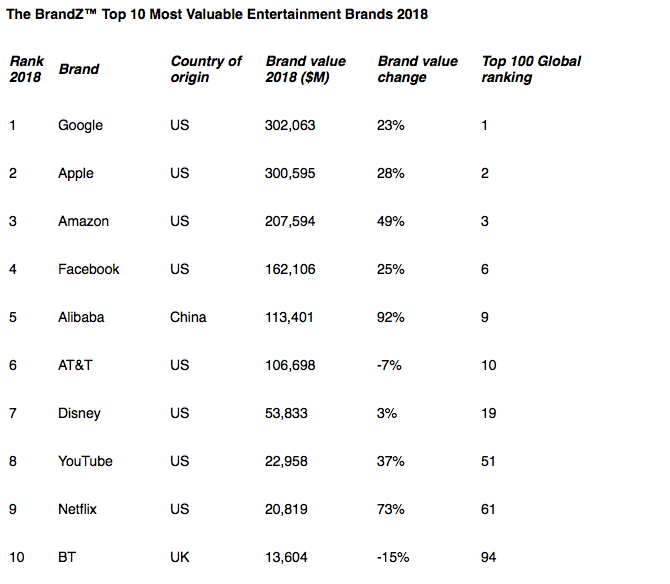 While there was overall growth across all sectors, Brand Z says the rise of entertainment services has particularly put pressure on telecoms brands such as BT and AT&T, which have dropped 15% and 7% in brand value, respectively.

The platform suggests that this is driving mega-mergers, such as AT&T’s attempt to acquire Time Warner.

“For brands being squeezed in slow-growth categories such as telecoms, the only solution has been to tear down traditional category walls, as curators, creators and providers of content meet in what has become an epic entertainment battle for our eyes and ears.”

Brand Z’s Top 100 World’s Most Valuable Brands list is in its 13th year. The list is a brand valuation study that combines interviews with over three million consumers with analysis of the financial and business performance of each company, using data from Bloomberg and Kantar Worldpanel.