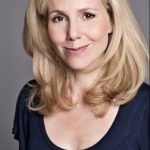 The series will be hosted by Phillips (pictured), who will invite a new comedy star in each episode to discuss sketches in the last 70 years of comedy. It will air later this year.

My Favourite Sketch is being produced by Potato, part of ITV Studios, from an original idea devised by Mor or Les Productions. It is Potato’s first commission for UKTV.

“We are really looking forward to sharing the hilarious results of each guest’s journey through their favourite sketches with Gold viewers.”

Michael Kelpie, managing director of Potato, said: “My Favourite Sketch is a real passion project for us and we’re absolutely thrilled to be working with the team at UKTV for the first time.”