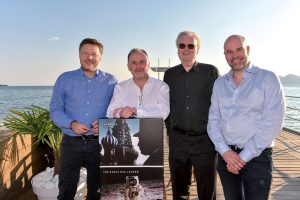 Atrium TV, the innovative drama ‘commissioning club’, has this week presented its members with a slate of four new drama titles. At the same time it also revealed that two of its previously announced titles, Quasimodo and One Giant Leap, are going into production.

Among the titles on display were Silo, a high concept drama set in a near-future San Francisco where, because of diminished resources and over-population, people have created ‘silos’ to keep unwanted people out. Also on show was A Dry Run: The Lincolns in Spain, a six part mini created by David Simon that will be produced by Mediapro (The Young Pope), Blown Deadline Productions (The Deuce) and Mark Johnson (Rain Man). The series, based on real events, will follow those who went to fight fascism in Spain prior to World War II.

The other Atrium projects include a TV adaptation of Doctor Zhivago from Sherlock producers Hartswood Films and The Last Amazon, a historical series from Gaumont (Narcos). Written by Rafe Judkins, The Last Amazon will focus on the great Amazon Queens such as Antiope and Hippolyta, portraying their extraordinary lives, loves and major battles, notably, their campaign against the Ancient Greeks.

Jeremy Fox, CEO of Atrium TV said: “These pitch sessions prove invaluable, allowing our members to fully engage with each project in development and decide which are relevant for their audiences.”

In separate news, there are reports that Mediapro is planning to adapt Alfred Hitchcock’s classic Riviera-set movie To Catch A Thief into a TV series. The company is working with Viacom International Studios on the series, which will be adapted by Javier Olivares.