The BBC and UK public service broadcasting in general faces “a fight for the future” that will test the whole British creative industry in a world where “the global media landscape is going to be dominated by four, perhaps five, businesses on the West Coast of America in the years to come”, according to BBC director-general Tony Hall. 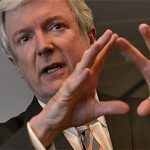 Speaking at the launch of the BBC’s Annual Plan, Hall cited 21st Century Fox’s sale to Disney, based on the reasoning that a global media company like Fox was “just too small to compete with the big players” as a sign of things to come.

“Step back from it all for a moment and we can see, more clearly thanever before, that the global media landscape is going to be dominated by four, perhaps five, businesses on the West Coast of America in the years to come. Companies with extraordinary technical, financial and creative firepower. And that’s even before you think of the media giants in China too,“ said Hall.

For the UK industry, the lessons appear stark, according to Hall. He said that under 40% of independent production companies based in the UK were either UK or European-owned, compared with 83% 10 years ago.

In addition to lacking scale, the BBC – a £5 billion organisation compared with Fox’s £45 billion revenues – is faced with a serious funding challenge, said Hall, with funding for the BBC’s UK services dropping 20% in real terms over the last eight years.

Hall said that, despite that, 70% of broadcast and on-demand viewing in the UK was of public service broadcast channels, falling to 57% among 18-34 year-olds.

To address the challenges, ahead, Hall said it would be necessary to take major steps including “work to transform iPlayer” – the BBC’s on-demand service – to increase personalisation, make content available for longer and improve the user experience.

The BBC’s annual plan also calls for the creation of a new kids app for 6-12 year-olds “that will provide a daily diet of inspiring, funny and fascinating facts, as well as enable young users to upload and share their creative endeavours, building social communities around particular passion”. The BBC will also commission a raft of new shows aimed at kids that will beavailable on broadcast or digital platforms, including interactive show Daydream Believers, aimed at younger kids, Logan High, a series aimed at 13-16 year-olds on iPlayer and Instagram, Operation Ouch and Lochside.

Other initiatives already announced include a new focus on nations and regions, including the launch of a dedicated channel for Scotland.

In his speech, Hall also highlighted the merger of BBC Studios and BBC Worldwide and cited commissions it has already struck with Discovery, channel 4 and Channel 5, with “further announcements” to be made shortly, as a key element of the BBC’s drive to diversify its revenues.

He said that the BBC would also “have to work with others like never before” including the big tech companies as well as other UK public service broadcasters and Sky.