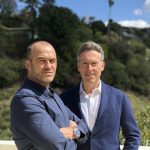 The new outfit will look at content development, financing, production and distribution. It will be based in LA and have an international outlook.

Atlantic Nomad’s first two projects will be The Knowledge, a UK espionage drama series, and Hammerhead, an epic crime series set in California port city of San Pedro and centered around a grieving mother who must decide between her loyalty to God or her family.

The company plans on creating a slate of between 6-10 original series over the next 12 months from both the US and the UK, and will complement its TV slate with one or two premium theatrical film projects every year.

Mirren is known for writing and producing TV series such as Criminal Minds and Without a Trace for CBS. Most recently he co-wrote, produced and show-ran Versailles for Canal Plus.

He has also worked across Brit series Casualty, Waking the Dead and Spooks.

Carmichael was president of film at Content Media for 15 years. Prior to this he was head of distribution for Mel Gibson and Bruce Davey’s Icon Entertainment International.

Mirren said: “The International eco system of how drama is created is experiencing a seismic change. Atlantic Nomad’s collective experience in developing, financing, producing and distributing global premium hit shows and films offers an undeniable bridge into the future of storytelling.”

Atlantic Nomad will make its debut appearance at MIPTV in Cannes next month and begin discussions with global distributors and platforms.