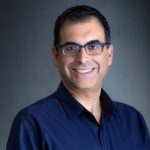 The exec, who has helmed shows such as Dancing with the Stars and Jimmy Kimmel Live, will exclusively work with Red Arrow on new series.

Saade (pictured) worked in US broadcaster ABC’s alternative division between 2004 and 2013, during which time he developed a reputation as a top unscripted producer.

There will also be collaboration with Michael Schmidt, chief creative officer of Red Arrow Studios.

Saade, who was previously at Dakota Films, is also known for ABC’s version of I’m a Celebrity… Get Me Out of Here, Wife Swap and Secret Millionaire. He has also made network specials, documentaries and comedies.

Spinnaker Chaos will focus on broad entertainment formats, and “prestige projects based on history, science and technology”, and already has “multiple” projects in the works with US cable channels and broadcasters.

For Married at First Sight producer Kinetic, the move comes soon after it hired Paul Lima as VP of development in January.