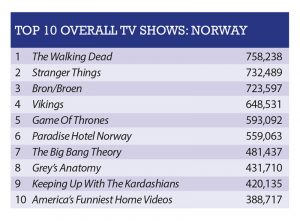 Netflix’s Stranger Things narrowly missed out on the top spot to The Walking Dead in the overall chart, with Danish-Swedish drama Broen (The Bridge) coming third in an unusual top three.

The Bridge’s final season began broadcasting on pubcaster NRK, along with on commissioning networks SVT1 in Sweden and DR1 in Denmark, on January 1.

Demand for Stranger Things far outweighs any other digitally produced series – indeed, The Crown, which was third in the digital originals chart, is well over 150,000 average demand expressions behind America’s Funniest Home Videos, which was tenth in the overall chart. 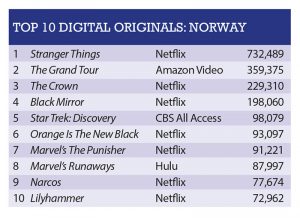 Other notable peculiarities this week include Lilyhammer making a rare incursion into the digital top ten. Of course, the Netflix and NRK series was shot in Norway, meaning local interest will be higher.

However, the fact it is nearly six years old and hasn’t had new episodes since December 2014 means it’s appearance is curious, especially with the number of SVOD originals available.

Parrot Analytics suggests Lilyhammer’s re-entry into the public consciousness could be linked to the notion that audiences are seeking lighter entertainment to ease them into the New Year.

Vikings, with its Norse story, comes in fourth overall, with Game of Thrones a lowly fifth. Reality series Paradise Hotel Norway provides the only locally produced show apart from Lilyhammer in either of our charts.