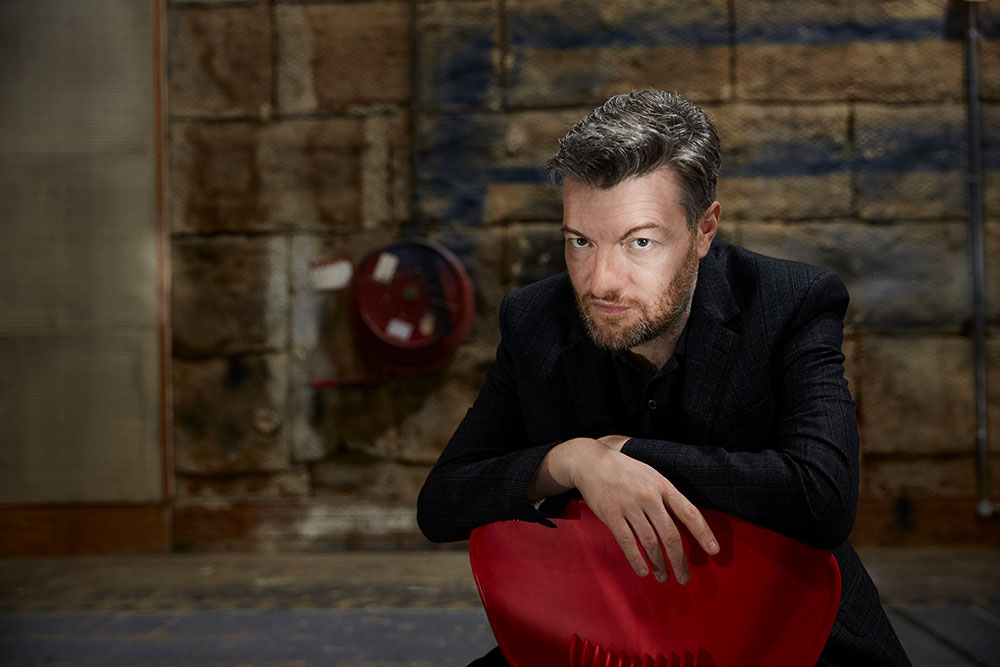 Charlie Brooker can lay claim to creating an entirely new TV genre when he launched Black Mirror on Channel 4 in the UK six years ago, terrifying audiences with scripted tales of technological nightmares. The show is now produced for Netflix, and here Brooker reveals what goes into each programme, which he creates with producer Annabel Jones. Season four debuted on December 29, 2017.

There are many films and TV shows that influence Black Mirror. The Twilight Zone is an obvious one. The Truman Show is another – it touches on all sorts of topics, but it in a fun, enjoyable way. The Wicker Man pops up in our shows, as do lots of weird and wonderful TV shows.

What happens generally is an episode will start with Annabel and I discussing an idea. It could be an issue like parenting or an observation on life, and at some point there will be a ‘what if’ idea. It will ping-pong back and forwards, as I try to think of the worst possible outcome.

At the point when I realised I can’t shut up, that’s when we think we’ve got something. I then write up a brief treatment of a couple of pages and send that off to Netflix. They come back with feedback and I go off and write the first draft. Sometimes it takes two or thee days, sometimes two or three weeks or sometimes it’s months. It’s random.

Then I email the script to Annabel and she pulls it apart, in a good way. That’s a process any writer has to go through – you hand it over, the notes come back and you get really defensive. Sometimes you rip it up at that point. You think, ‘fuck it, it’s not working’, and you start again, or you park it and go on to another one.

When the director and cast come on board, it all changes again. Jodie Foster had lots of thoughts on [season 4 episode] Arkangel, so we went back and re-drafted it. Crocodile, also from this season, was originally written with a male lead, but we sent the script to Andrea Riseborough for one of the other roles and she came back wanted to play that part. We thought about it, thought it was interesting, and went with it.

As more and more people get involved with it, you get more flesh on the bones. My job at the start when I’m writing the script is to describe what I think the finished programme will be and then it transforms throughout the process. Luckily, I’ve found that often can’t remember what it originally looked like in my head, because the finished product has so many things I wouldn’t have thought of added to that skeleton.

You can’t be that topical – you don’t know how the world is going to be in a year and a half’s time. You don’t want to be talking about 18 months ago when you premiere. We don’t shy away from it, but that’s not where the ideas tend to come from anyway – we don’t look at Brexit and react.

It’s really hard to say which is the flagship episode of a Black Mirror season – everyone has different favourites. Of those that saw the two preview episodes of season four (Arkangel and USS Callister) there was about about a 50-50 split. They’re all very strong flavours this time around.

San Junipero, the first episode written for Netflix, was conscious decision to try to experiment, expand and up-end what the show is. That’s why USS Callister is very dark in places, but has moments of comedy that you might not have expected from Black Mirror a few years ago.

Because we were pleased with how San Junipero came out, we gained the confidence to play with the tone more than we have before. We were also looking at what we hadn’t done before – we didn’t think we could do the eighties, but we’ve now done the eighties. With USS Callister it was, ‘Can we do space?’.

More often than not, I find myself surprised when we get it right about technology – we don’t tend to research much. It’s a little bit chilling if someone who works in certain field says I’m right about something. There’s an episode in this season called Metalhead starring Maxine Peake that is a sort of technological nightmare playing out very quickly and primal. That’s not the sort of story we normally tell – it tends to be about human dilemma.