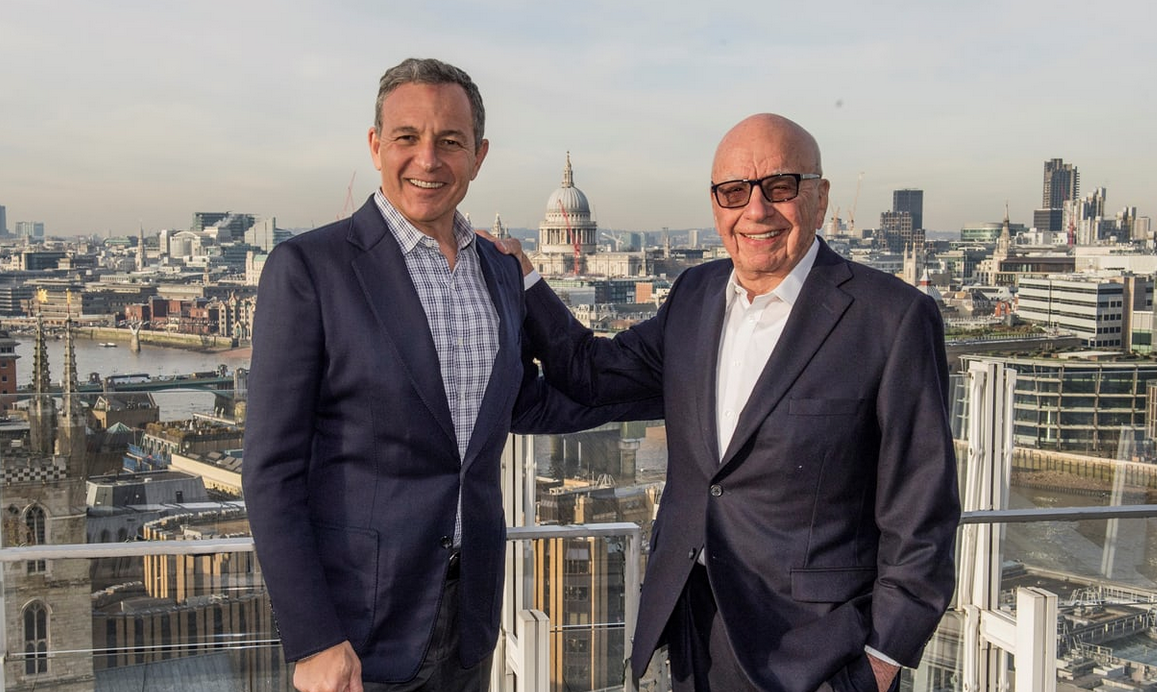 The Walt Disney Company has secured a US$66 billion deal that hands it most of 21st Century Fox’s TV and film assets, marking a seismic moment in recent entertainment history.

The deal effectively brings to an end Rupert Murdoch’s long career in entertainment media empire building, though he retains control of News Corp, which is primarily a news publisher.

Bob Iger will remain chairman and CEO of Disney through to 2021, confirming news that had leaked last week. Disney’s board insisted on the move, with the executive considered the best candidate to oversee the transition while keeping a steady hand on the existing Disney entertainment and theme parks business.

Programmes such as Modern Family, The Simpsons, Family Guy, Empire and Gotham will transfer over, as will film franchises such as X-Men, Avatar and Planet of the Apes.

As Disney already owns ABC, it cannot also buy the Fox broadcast network due to anti-competition rules, and the Fox News and Fox Sports businesses remain with the Murdochs.

Those assets will be spun out to form a new listed company just prior to closure of the deal.

Industry sources close to both companies have voiced concerns over how Disney will integrate the new assets into its group.

Disney has traditionally taken a much more vertical approach to its businesses, with all distribution going out through its Disney Media Distribution unit.

Other sources have questioned how a relationship between Disney, which mainly focuses on big brands, and Endemol Shine would work.

Much of the latter’s business comes through high-volume deal making of unscripted tape and reality formats, and is dependent on its large catalogues, which a well connected source noted runs contrary to Disney’s normal business models.

Disney expects to make “at least” US$2 billion in “cost savings from efficiencies realised through the combination of businesses”, meaning it is likely there will be redundancies from various parts of the merged business.

Following closure of the deal, which is subject to regulatory greenlights and shareholder approval, the Murdochs will own about 5% of Disney stock, according to US reports.

Disney, founded back in 1923, has focused on big-ticket acquisitions under Iger, who succeeded Michael Eisner in 2005.

Among the biggest deals are those for Pixar Animation, Marvel Entertainment and Star Wars owner Lucasfilm.

It acquired TV tech infrastructure company BAMTech earlier this year as a precursor to launching its own SVOD service, and adding Fox programming and movies to that provides another arrow in the quiver.

The deal in quotes

Bob Iger, chairman and CEO, Disney
“The acquisition of this stellar collection of businesses from 21st Century Fox reflects the increasing consumer demand for a rich diversity of entertainment experiences that are more compelling, accessible and convenient than ever before. We’re honored and grateful that Rupert Murdoch has entrusted us with the future of businesses he spent a lifetime building, and we’re excited about this extraordinary opportunity to significantly increase our portfolio of well-loved franchises and branded content to greatly enhance our growing direct-to-consumer offerings. The deal will also substantially expand our international reach, allowing us to offer world-class storytelling and innovative distribution platforms to more consumers in key markets around the world.”

Rupert Murdoch, executive chairman, 21st Century Fox
“We are extremely proud of all that we have built at 21st Century Fox, and I firmly believe that this combination with Disney will unlock even more value for shareholders as the new Disney continues to set the pace in what is an exciting and dynamic industry,” said Rupert Murdoch, Executive Chairman of 21st Century Fox. “Furthermore, I’m convinced that this combination, under Bob Iger’s leadership, will be one of the greatest companies in the world. I’m grateful and encouraged that Bob has agreed to stay on, and is committed to succeeding with a combined team that is second to none.”

“When considering this strategic acquisition, it was important to the board that Bob [Iger] remain as chairman and CEO through 2021 to provide the vision and proven leadership required to successfully complete and integrate such a massive, complex undertaking. We share the belief of our counterparts at 21st Century Fox that extending his tenure is in the best interests of our company and our shareholders, and will be critical to Disney’s ability to effectively drive long-term value from this extraordinary acquisition.”