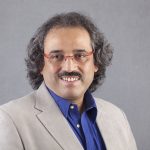 The news arrives as Rafe Oller, who has served as CEO and general manager at the network since 2015, exits Z living to pursue a new venture.

A search is currently underway to find a replacement for Oller.

Kheror (pictured), who previously served as president of strategy and planning of international business at Zee Entertainment, will be based at its LA headquarters.

Z Living will increase its focus on programming based on how to live a healthy lifestyle. This is partly based on the success of The Dr. Oz Show, which the network acquired earlier this year.

Amit Goenka, CEO of Zee Entertainment, said: “Z Living made great strides in the last several years, and we thank Rafe Oller for his leadership in elevating the network’s original programming and marketing strategies.

“Now, as Z Living enters its next chapter, we have great faith in the vision of Rajeev Kheror to further the network’s commitment to programming dedicated to healthy living, and to broadening its reach in the US and globally.”

Zee claims that in 2017 Z Living has increased its total day audience by 82% from January through to November. October was the network’s highest rated month, with the year’s final quarter predicted to be the highest in the network’s history.