The BBC has moved Damon Pattison, currently head of development at BBC Studios, to head of entertainment for the North and Pam Cavannagh, formerly a BBC One channel exec, to the role of creative director at the producer, as Kieron Collins exits. 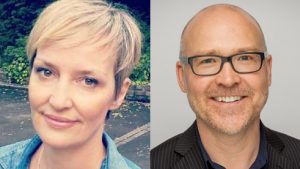 Taking up the role in the New Year, Pattison (pictured right) will be based across Salford and Glasgow, where he will lead the strategy for entertainment out of London for BBC Studios, the production wing of Uk pubcaster the BBC.

He is also charged with implementing new editorial and business strategies for the department with a view to growing the slate in the nations and regions.

Pattison will report into BBC Studios’ newly appointed genre director for entertainment and music, Suzy Lamb, when she joins in the New Year.

Cavannagh (pictured left) will join Pattison as the new creative director. She will be responsible for helping grow the entertainment slates in Salford and Glasgow and Support existing productions.

Meanwhile, after 12 years at the BBC, Collins, managing editor of entertainment for the North, has announced he is leaving to pursue new opportunities.

Collins said: “I’ve absolutely loved my time leading the teams behind some of the BBC’s most iconic entertainment shows, including Dragons’ Den, Mastermind, Question of Sport and many more.

“This year we’ve developed two fantastic new formats for BBC One, with daytime quiz The Boss and the Saturday night tribute act spectacular Even Better Than The Real Thing, and to work on all those shows with the best people in TV – and to do it from the North – has been a privilege and a joy.”