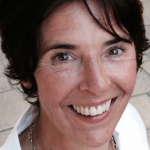 Llewellyn joined Optomen in 1994 and led the business as managing director since 2005. The prodco was responsible for top cooking shows such as Two Fat Ladies, Ramsay’s Kitchen Nightmares and Naked Chef.

All3Media acquired Optomen in 2010, and Llewellyn stepped down from the role succeeded by Nick Hornby and Tina Flintoff in April 2016.

Llewellyn is often credited for the rise in celebrity chefs such as Jamie Oliver, who paid tribute in an Instagram post (below). Speaking to TBI last week Ramsay credited her work for the success in a range of his shows with joint production company One Potato, Two Potato.

He said: “I remember going to meet Pat Lleywellyn 15 years ago, an amazing lady, who, from Two Fat Ladies to The Naked Chef to Kitchen Nightmares, was instrumental to their success.

“Optomen were amazing, really amazing and that was Pat Llewllyn. She was a dream. Even in our first Kitchen Nightmares she turned around and was there with a pair of marigolds on washing up. That’s when you know you’ve got a team committed to making things a success.”

Jane Turton, All3Media’s CEO, said: “Pat Llewellyn was an extraordinary woman who lit up every room and made the biggest and most positive impression on so many of us and in so many ways.

“As the boss of Optomen, she developed and produced some of the world’s best known and loved programmes and introduced us to amazing talent who until then were completely unknown, or only became household names after working with Pat.

“She was a pioneer, creatively brilliant and a fantastic business leader. She was also great fun, witty, warm, kind and clever and there was never ever a dull moment in her company. All our love and thoughts are with Ben and their family and friends.”

Optomen said in a statement: “Optomen’s driving force Pat Llewellyn sadly passed away this weekend. She was an incredible human being and creatively brilliant, discovering and developing amazing talent who went on to become some of the most loved names on television.

“It’s thanks to Pat that Optomen is the special place that it’s always been. Her legacy lives on within these walls, and we will continue to honour and cherish the values that she embodied. She was a pioneer, incredibly funny and kind, and knew how to live, as well as making outstanding television. All our love and thoughts are with Ben and their family and friends.”

TBI would like to offer its condolences to Patricia Llewellyn’s family and friends.

Rest in peace wonderful Patricia llewellyn…..sadly today I found out my dear friend and the Producer that discovered me 20 years ago as the Naked Chef passed away loosing her battle to Cancer….people often said in the Naked Chef who is the voice that asks you all those questions and that was dear Pat ❤️ what a loss, she was an Amazing, Kind , fun & truly wonderful woman, she had a huge impact on me and my early TV career. Without question one of the most gifted matriarchs of the TV industry. Her ability to spot talent and her timing together with oodles of creativity and sheer drive made her a real force. She will be sorely missed. Love you Pat xxxx