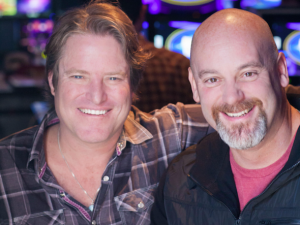 The deal with 10Fold does not include an equity stake, but ProSiebenSat.1-owned Red Arrow has an option to acquire a majority position in the future.

10Fold is the latest venture from producers Armstrong and Ringbakk, who previously led 5×5 Media as co-CEOs, where they produced shows such as NBC’s Fashion Star, ABC’s Bet on Your Baby and The Hero for TNT, which featured Dwayne ‘The Rock’ Johnson.

The pair launches 10Fold with an existing development, active productions and IP created during their time with 5×5, which was housed within Electus before transferring to Mike Darnell’s Warner Horizon Television in 2013.

Armstrong was briefly appointed interim CEO of Gurney Productions at the end of 2016, as ITV went to war with Scott and Deirdre Gurney over ownership of the Duck Dynasty prodco. He remained co-chief of 5×5 at that time, though he and Ringbakk left to establish 10Fold.

For Red Arrow, the deal expands its unscripted presence in the US. It already owns The Taste producer Kinetic Content, Mob Wives creator Left/Right, Tiny House Big Living form Dorsey Pictures and Say Yes to the Dress prodco Half Yard Productions among other ventures.

“We are always on the hunt for proven creators – especially those with a demonstrated ability to successfully build and run a production company,” said Red Arrow chairman and CEO Jan Frouman.

“Craig and Rick are well established on all counts. They will build on our format output, be great partners throughout the Group, and know how to manage the nuts and bolts of the business.”

Armstrong said Frouman and Red Arrow had been “flawless”, while Ringbakk added: “They have a great network of companies, and a phenomenal track record.”