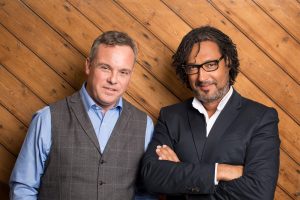 The comes through Viacom-owned Elephant House Studios, which is the in-house production arm of Viacom-owned UK broadcaster Channel 5.

This marks marks the first time Elephant House has financially supported an indie, and it has an option to take a minority stake in the prodco.

Viacom, which acquired Channel 5 in 2014, said the move demonstrates Elephant House’s “ambition to partner with the brightest and most respected creative talents both on and off screen”.

“Our ambition is to create a centre of excellence across a wide range of genres within Elephant House,” said Elephant House VP Joe McLusky.

“We’re delighted to partner with two such highly respected talents; we’ll work closely with David and Mike, offering them the creative platform, capital support and resources to successfully nurture and grow their business.

Elephant House will provide financial, strategic and operational support for Banjo, which launches next month with ex-BBC Studios exec Mike Smith and British presenter David Olusoga at the helm.

The prodco is planning to produce high-end religious, travel and adventure programming. Both Smith and Olusoga have extensive experience in blue chip productions across factual genres.

Olusoga is known for BBC shows such as Now Story of the Noughties and The Slavery Business, while ex-BBC Studios executive producer Smith conceived shows such as Simon Reeves’ Sacred River and The Silk Road with Sam Willis.

The pair has worked together on shows including Ottomans: Europe’s Muslim Emperors.

Smith said Viacom had “gone the extra mile to back our shared vision and the culture we want to create”, while Olusoga said: “We want to make programmes that infuse specialist factual TV with greater emotion and authenticity and create formats that are immersive and inclusive but also rooted in the here and now.”