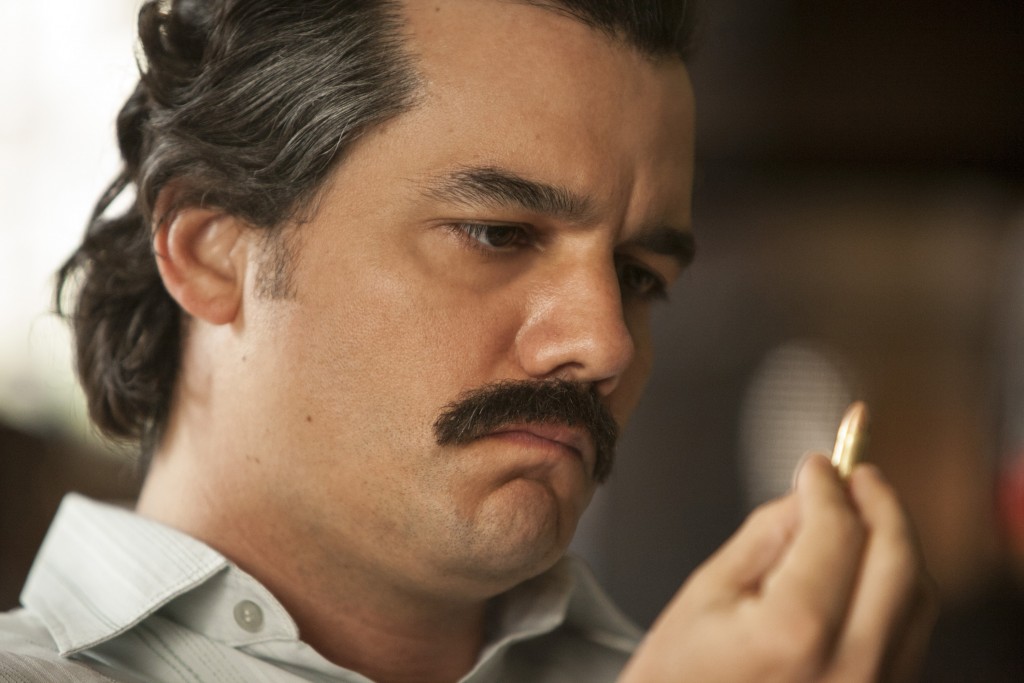 In the Benelux region, returning favourites are leading our latest In-demand lists, with digital titles Orange is the New Black and Narcos receiving high demand along with Game of Thrones on the overalls chart. 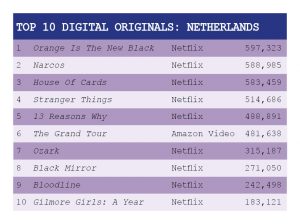 The three nations also had Orange is the New Black in their top threes. It came top in the Netherlands, second in Belgium and third in Luxembourg.

Stranger Things was most watched in the digitals list for Luxembourg, as viewers look forward to the launch of the upcoming season of the horro-meets-nostalgia show.

Newcomer Ozark appeared in the top ten for Luxembourg and the Netherlands, coming in seventh place in both territories. 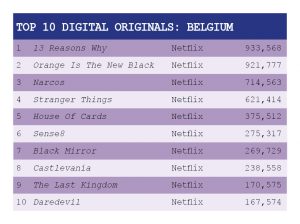 Netflix originals featured heavily in Belgium, with all ten spots taken up by shows such as Castlevania, House of Cards and 13 Reasons Why. Luxembourg’s top ten featured Hulu drama The Handmaid’s Tale, which came in eighth place, while the Netherlands saw Amazon’s The Grand Tour come in sixth.

The Handmaid’s Tale’s popularity this week is likely linked to its 13 nominations at the Emmy Awards 2017.

Unsurprisingly, Game of Thrones was the top show in all three nations overalls list. The return of the show on July 16 saw it create demand expressions of over five million in the Netherlands, over three million in Belgium and over one million in Luxembourg two weeks later.

Despite a leak of Sunday’s episode, HBO has claimed that it was the most watched of season seven so far, drawing in 10.2 million viewers on the night. 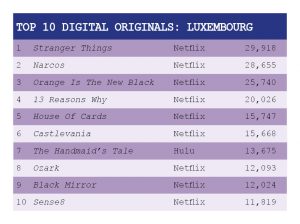 Pretty Little Liars also appeared in the top three in all the territories overalls list. The show came in second for Belgium and the Netherlands, but third for Luxembourg.

Surprisingly, Luxembourg’s second spot was taken up by The Bold and the Beautiful. It also featured WWE Monday Night Raw in its top list coming in eighth place as new episodes are set to air on August 11.

In the Netherlands, the baking competition show Heel Holland Bakt, a remake of The Great British Bake Off, came in fifth place ahead of its return on September 3. It is the only regionally made original to appear on all the lists.

The rest of the overalls lists were packed with old favourites such as Friends, Grey’s Anatomy, Prison Break and The Walking Dead. 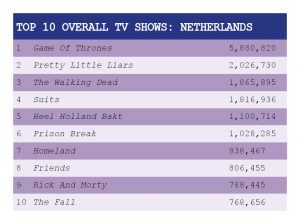 In the Netherlands, Game of Thrones took more than twice the demand expressions than the runner up in the overalls list. The show generated 5,880,820 expressions compared to Pretty Little Liar’s 2,026,730.

Ozark was featured seventh on the digital originals chart, which means it has 30% more demand than Bloodline sitting below it.

Baking show Heel Holland Bakt is the only non-English speaking show featured across its lists. 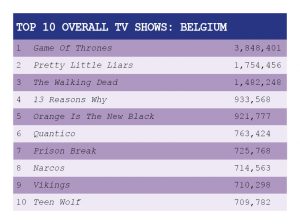 Narcos and Orange is the New Black featured on both of Belgium’s top lists, showing a high demand for the Netflix titles.

Stranger Things is also anticipated in the territory as audiences look forward to its October 27 return. 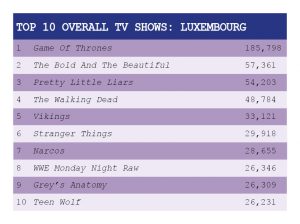 In Luxembourg, older titles are still making big waves with Grey’s Anatomy, Monday Night Raw, The Walking Dead and The Bold and the Beautiful all coming up in its overalls list.

Tags: Game of Thrones, Narcos, Orange is the New Black, Ozark, Stranger Things, The Bold and the Beautiful, The Grand Tour