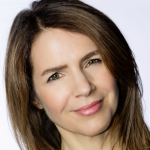 This comes after Michael D. Armstrong, who ran those brands internationally, became general manager of black entertainment-focused BET in the US at the end of June.

Offman and Okosi will report to VIMN president and CEO David Lynn in their new roles.

Paramount Channel launched outside the US in 2012, and is now in 115 territories. It is separate to the upcoming Paramount Network in the US, which will soon replace Spike TV and focus on general entertainment and premium programming.

New Paramount Channel chief Offman has been with Viacom since 2008, initially overseeing the rebrand of Paramount Comedy to Comedy Central.

The former Discovery Canada factual chief followed that with a series of promotion, culminating in her role as Comedy Central International chief and head of Comedy Central and MTV in the UK.

Okosi took on his current role earlier this year, having joined US media giant Viacom in 1998 in a marketing role. By 2004, he had joined the MTV International strategy and business development team, where he created the business plan to launch Viacom in Africa.

“Jill is a creative, strategic leader whose vision continues to drive share and distribution growth for Comedy Central internationally,” said VIMN chief Lynn. “In this new role, she will lead the international development of one of the most iconic entertainment brands in the world.”

“Alex expertly spearheaded the growth and expansion of Viacom in Africa, and has overseen the creation of an incredible variety of content and experiences that spotlight the best of African American and African culture and creativity,” he added.