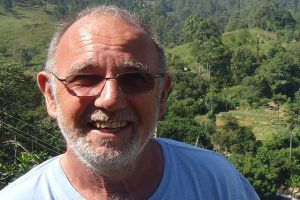 Jimmy McGovern has a reputation for tackling social issues head-on. Through Hillsborough, The Accused, Dockers and The Street, he is known for using TV to shine a light on the stories and struggles of working people in the UK.

In ITV crime drama Cracker, he created a UK hit that travelled across the Atlantic, was remade for ABC, and was sold back into the UK (and broadcast as Fitz).

The fifth of nine children, McGovern went to a church school in his native Liverpool. His new drama, Broken (pictured below), follows a Catholic priest from the north-west of England struggling with issues from his past, while working through those faced by his parishioners. It is, McGovern says, Game of Thrones star Sean Bean’s best work.

The reason I wrote the film Priest in 1993
The only reason I did the film is that the BBC kept turning it down as a drama series. The head of drama back then was Michael Wearing, who was great but didn’t want to know.

Sean Bean has a really interesting arc in Broken
Anybody of my age coming through the experiences I came through with Jesuit priests ends up harmed, and that’s what happened to this character. He’s been totally screwed up.

We’re blessed with great priests in Liverpool
They wouldn’t last there unless they concerned themselves with issues that affected their parishioners: poverty, unemployment, sickness, marriage, death and social issues. The priest as social worker is crucial, particularly in a city like that.

We planned a story-of-the-week set-up in Broken
I like that style, and used it on [BBC dramas] The Accused and The Street. It’s a great way to work, but as soon as it became apparent we might get Sean Bean, it ceased to be an option.

Landing Sean Bean was a curse and a blessing
A curse in that I had to get to work again, but a blessing in that it’s a much better series, and I think the best thing he has ever done.

Inside Broken is the idea there’s no safety net
There is a female character with three kids who loses her job and gets nothing, no help whatsoever. All she has done all her life is work, but she is skint and it is shocking.

I had bets on Trump and Brexit, and I won
I’m not saying how I voted [in the UK referendum on EU membership] and I’m not saying I like Trump – I think he’s a bloody idiot – but I saw it coming.

I have my eye on a new script
It’s written by a woman with very little experience, and it’s about the NHS. It’s a fascinating script, so I might ask if we can work together on it. I think it will be a single film.

You see shows that totally restore your faith
I loved [Channel 4 series] Cucumber. I thought that was fantastic, brave and risk-taking, but you do still see crap as well.

I had nothing to do with Fitz
I just said ‘give me your money’. I really should have involved myself.

I did Channel 4 Dockers docudrama for nothing
Part of the reason I did it was because the Americans were doing Fitz and I was told I’d be a multimillionaire, but it was pulled and I had to carry on as if nothing had happened.

TV should be better now because there’s more money
Whether it is better than the old days I don’t know. I loved Dennis Potter [The Singing Detective]; I thought he was fantastic. There’s nobody like him now.