Greece is yet another territory in which Game of Thrones rules over rival factions. The HBO series just beats Fox drama Prison Break in the overall charts despite season seven not debuting until the summer. 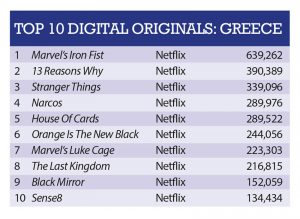 The series has been on hiatus since April last year, as filming in colder climates as dictated by plotlines has meant a July 16 season eight debut has been set.

Prison Break, meanwhile, returned to consciousness in Greece after a new season of the show launched on April 4 following an eight-year hiatus.

Coming in third is Pretty Little Liars, whose online popularity remains consistent. The Walking Dead is at four, perhaps slipping after the conclusion of season seven in mid-April.

American series are order of the day in Greece, with all slots in the overall and digital charts coming from TV’s biggest production market. 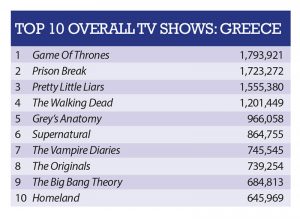 Evergreens such as Grey’s Anatomy, Supernatural, The Vampire Diaries, The Originals, The Big Bang Theory and Homeland all chart in the overall list.

Marvel’s Iron Fist is top of the pile by some distance from second placed 13 Reasons Why (639,262 and 390,389 respectively), with Stranger Things third.

Despite this, no digitally produced series chart in the overall top ten, and the tenth placed Sense8 took almost six times fewer demand expressions than the lowest-placed overall original, Homeland (134,434 vs 645,969).

Parrot Analytics notes finales and premieres had significant impact on demand, with Homeland’s US season ender on April allowing it to break into the top ten. Prison Break’s recent debut also saw it spike.