Versailles has won the drama award at the TV France International 2017 Export Awards.

Banijay Rights and Versailles beat 100% Distribution with Spin and TF1 Studio with No Second Chance in the French drama category.

The lavish period drama has been shopped by Banijay Group’s sales arm (CEO, Tim Mutimer, pictured above) to buyers including the BBC in the UK, Ovation in the US and Sky in Germany. Canal+ has ordered a second season of the show. 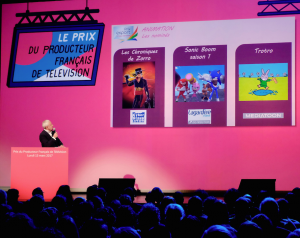 Mediatoon triumphed in the category for animation – a sector of the TV industry in which France is traditionally strong – with Trotro. Cyber Group Studios’ Zorro the Chronicles and Xilam’s Sonic Boom were the other nominees.

In docs Balanga won the export gong for Face to Face, which traces the rivalry between aircraft manufacturers Boeing and Airbus. France TV Distribution, with Apocalypse: The Battle of Verdun, and Terranoa, with Moon, were also in the final selection.

“It presents a comprehensive, enriched, targeted and editorialised array of programmes to international acquisition executives,” he said.

“Thanks to the distributors’ association SEDPA, international sales agents of TV programmes now have a legal status in France.”