C4-backed Walter Presents launching in the US

Channel 4-backed streaming service Walter Presents will launch in the US in March.

The on-demand, which specialises in drama programming from around the world, has proved popular in launch territory the UK.

Broadcaster Channel 4, which runs Walter Presents with Global Series Network (GSN), has previously outlined plans to expand Walter Presents internationally, and the US launch, as an SVOD service, will be the first outside the UK.

The service launched on All4, UK pubcaster Channel 4’s on-demand service, free of charge last January. In the US it will be available over-the-top and through partner platforms for US$6.99 a month. It will be advertising free. 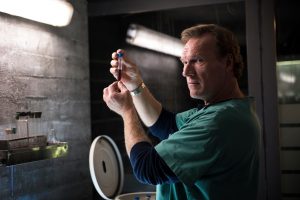 At launch the line-up will comprise 34 series sourced from twelve international territories.

Titles include Norwegian thriller Valkyrien (pictured) and French drama Spin. The volume of programming will reach 500 hours within a year, GSN said.

“For years America has led the way with a string of iconic titles to become the undisputed home of great TV drama, but the rest of the world hasn’t stood still,” said Walter Iuzzolino, the co-founder and curator of the SVOD service that bears his name.

“Inspired by the quality of the very best U.S. drama, countries all over the globe are now producing extraordinary TV series, unforgettable stories which are becoming global smash hits.”

Channel 4 chief executive David Abraham said: “Our partnership with GSN making Walter Presents a phenomenal success in the UK has proved there is a significant market for exceptional non-English subtitled drama, and I’m sure US viewers will be equally attracted to its rich content offerings from across the globe.

“The US launch of Walter Presents in SVOD represents Channel 4’s first major investment outside of the UK and the first step in a planned global roll out.”

The Walter Presents roll out comes soon after news that another UK-based SVOD service, Britbox, will hit the US this year. It will be a more targeted offering, reaching out to international drama fans.

Former Fox exec and GSN CEO Jason Thorp said: “The niche SVOD market has huge potential for growth and the US is the perfect starting place for Walter Presents’ international rollout.

“We’ve developed a strong, smart, standout brand, cleverly curated with a proven performance track record and we’re confident it will strike a chord with US audiences.”