ITV links with Talpa for another show 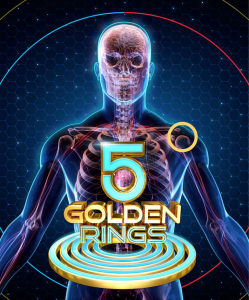 ITV and Talpa have been working increasingly closely since the deal, with the broadcaster ordering Talpa shows including The Wishing Tree; Dance, Dance, Dance; and The Voice, which it took from the BBC.

In the Netherlands, Talpa is a shareholder in SBS6 and often uses the net to launch its shows. It will be the Dutch home for Five Golden Rings (its international title), with a local version launching next year.

The show was co-developed by Talpa and Possessed, the ITV-owned prodco run by Glenn Hugill (the banker from Deal or No Deal). It was originally a pilot for Sky called Ring of Fire.

Billed as a connected gameshow, the format has contestants compete on an interactive studio floor. Viewers at home can take part via their phones.

ITV, which makes and sells another interactive quiz, Pressure Pad, has its own distribution division, but Talpa’s sales arm, helmed by Maarten Meijs, will be selling Five Gold Rings. It will launch it internationally at MIPCOM later this month.

ITV Studios will produce where it has a local production business, with a hub being created in the Netherland for the new show.

“Collaborating with John de Mol and his creative team at Talpa has been instrumental in developing Five Golden Rings into a fully connected format,” said Hugill, managing director of Possessed.

“Enabling any and all viewers of this highly visual and wholly inclusive game to play along via a mini version in the palm of their hand provides a brilliantly immersive experience; more and more this is what buyers are looking for. Together we think we have created something unique for the Instagram generation.”

De Mol, the former Endemol chief and founder of Talpa, added: “Five Golden Rings is just the beginning of our already successful partnership. Together with ITVS, we have been able to use our digital expertise to develop the show into a great connected format. Two direct commissions in two key TV markets is very special in our industry and we feel Five Golden Rings is a show that can truly create a global impact.”