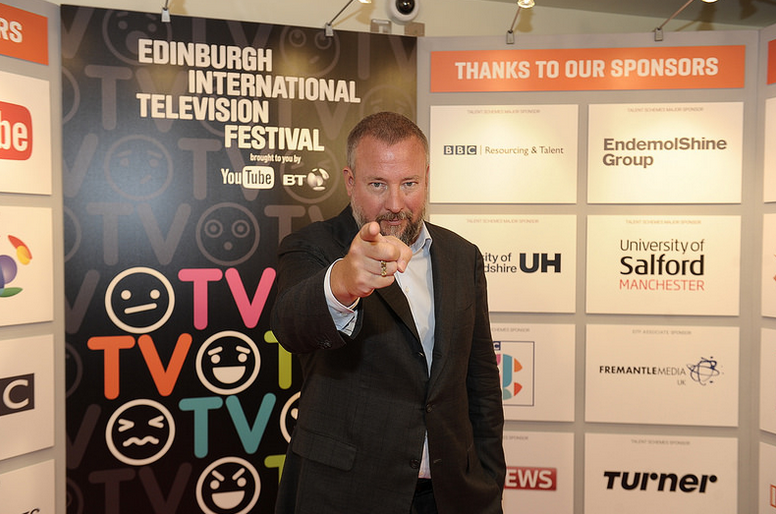 Shane Smith and his plan to take over the media world dominated delegate chatter at the Edinburgh International Television Festival last week. Jesse Whittock wonders what the Vice boss would make of the BBC’s latest comedy efforts.

During his MacTaggart Memorial lecture on Wednesday, which met with a mixed reaction (at best), Vice Media CEO Shane Smith was merciless in his attack on the broadcasting fraternity, claiming its focus was wrong, programmes too boring and establishment-friendly, and that it provided millennials with content whose tone bordered on irresponsible.

He even went as far as saying channels have effectively colluded with the rise of Donald Trump, upping coverage of his presidential campaign in exchange for bigger ratings. Some observers saw this more as a criticism of US telly, but the point was made regardless.

After the event, execs seethed over his take on their programming output, and were particularly galled at three VTs Smith played of Vice programming, each of which heavily featured… him. “Egomaniac,” one growled to me immediately after the keynote.

If Smith struggles with Britain’s factual output, God knows what he thinks about the Landmark Sitcoms season that BBC comedy chief Shane Allen and his team launched last Sunday in the UK.

This programming block, comprising reboots of heritage British comedies, some of which are widely considered classics (Porridge) and others that are widely not (Goodnight Sweetheart).

Commissioned in March, the season, and what it appears to represent, bothers this journalist. In a world in which there is access to so much source material, it’s depressing the UK’s biggest broadcaster is so keen on recycling programmes – a number of the episodes were line-for-line remakes.

There are new efforts within the season – a Johnny Vegas-fronted family sitcom called Home From Home and Motherland, which is from Graham Linehan’s Delightful Industries and Sharon Horgan co-owned Merman (more on her later) – but shouldn’t comedy on public broadcasters really be about new voices?

Speaking to comedy producers – especially up and coming talent – in Scotland last week revealed that the season bothers a lot of other people too. (And this is despite there being young writers attached to some of the Landmark pilots.)

One producer said they were not sure if they should bother bringing new ideas to the BBC commissions, or if they were better off taking the risky stuff to Netflix or Amazon, or even Sky or Comedy Central. The problem, they said, was they still want their best ideas on the BBC, on those much-maligned mainstream television channels with which Shane Smith took issue.

Shane Allen said this week that positive reactions to the pilots of Keeping Up Appearances or Are You Being Served? could lead to full season commissions. That means even more slots unavailable for new ideas.

The BBC’s comedy output, especially that of BBC One, has become as broad and mass-market as most can remember. Allen and BBC director of content Charlotte Moore will argue that they commission season after season of Mrs. Brown’s Boys because it rates and audiences, mainly those around retirement age, absolutely love it. Empirically, the Beeb can point to a Radio Times public poll that rated the show as the best sitcom of the 21st century.

You won’t find many comedy producers who religiously tune into the show, whose pantomime tone wouldn’t look out of place on the BBC in the 1970s, but it has an audience, and channel controllers love shows that demand share week after week.

As Horgan, one of international television’s most original comedy voices, said in her Alternative MacTaggart speech last week: “What really gets bums on seats is family viewing.”

Her shows, such as BBC Three’s Pulling and Dead Boss and Channel 4’s Catastrophe, are absolutely not for families, but they are critical darlings. Horgan is very much a writers’ writer, whereas Mrs. Brown’s Boys is for a generation to which younger adult audiences simply can’t relate.

“I get it, I get why you want to make a sitcom that has seven million viewers [a week], and it’s tricky as it must be so hard to work out if something is going to be shit or whether it’s a critical hit,” Horgan mused last week.

“I wonder if it’s gone too much that way, though,” interviewer and comedian Frankie Boyle responded. “To me it seems that television is back in 1978. They’re remaking a lot of old comedies, and there is an air that you wouldn’t know there has been [an] alternative comedy [movement since then].”

In what was the most international and thought-provoking Edinburgh festivals in a good few years, you hope the message British TV commissioners leave Scotland with is that while broad is fine – necessary, even as audiences fragment – innovative new voices are all around and people want to see them.

And the BBC should be commended for other parts of its comedy output, especially on the now-online-only BBC Three platform.

Phoebe Waller-Bridge is perhaps the best example to have emerged in recent months. Her series, Fleabag, is currently a critical hit. It follows the actress and writer as a young London café owner with a huge sexual appetite and intimacy problems.

In a sense, it’s just the sort of millennial-attracting television Smith claims traditional broadcast groups aren’t making – and it’s from the BBC.

Damian Kavanagh, BBC Three’s controller, claimed that there is only one key distinction between his ‘channel’ and Vice. Addressing bleary-eyed delegates nursing hangovers from Thursday night’s Viacom party, he quipped on Friday morning: “The difference? You’ll never see me in a BBC Three show.”