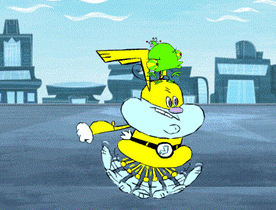 A pair of former Walt Disney Company execs have teamed up to create an LA-based digital production studio.

Mobile entertainment veteran Jeff Nuzzi and animator and voice actor Bob Spand have launched Like Pizza, which will aim to produce original animated properties for games, mobile, digital services and other platforms.

The company’s first project is Bunny Rappid, which is billed as a animated action comedy series that chronicles the misadventures of a crime fighting rabbit, his girlfriend Mary Merewolf and sidekick Nuke-o Gecko.

A Kickstarter campaign has begun to fund a series of ‘appisodes’ that will combine music and serialised animation of between 5-7 minutes through an app. A music video for the brand was released on YouTube yesterday, featuring a song from LA female-fronted pop punk band The Bombpops.

The plan is to launch the Bunny Rapid app next year, with episodes expected to be distributed on video-on-demand platforms too.

Nuzzi (pictured) is a former director of global marketing at Disney, and has worked at THQ Wireless, Universal and Fox. He has managed mobile rights and licences to Star Wars, professional sports leagues, SpongeBob SquarePants and WWE.

Spang is a director, writer and animator, and voiced several characters on the Cartoon Network series Ant and the Aardvark, which ran within Pink Panthers and Pals.

He worked Walt Disney Feature Animation as a senior visual designer and was lead animator and director on Drew Carey’s Green Screen Show.

“From both my experience in the industry and as a parent, I saw firsthand how kids are consuming both video and games on mobile devices and loved the idea of creating a world around a unique character who launched on mobile first,” said Nuzzi.

“Jeff and I are both huge animation and game fans and loved the idea of blending our industry experiences to create new episodic short form cartoons and games,” added Spang. “We are extremely proud of Bunny Rappid and its fast-paced comedy full of hilarious characters, stories and environments and hope that folks will help support the Kickstarter campaign.”

The pair will lead Like Pizza from Pasadena, California.