UK viewers have been the quickest in Western Europe to embrace on-demand TV, while Italians watch more TV overall than any other nationality in the region, according to new research. 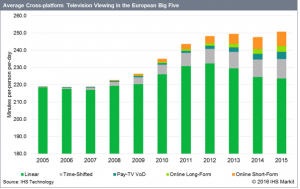 Overall daily viewing time of linear TV has continued to decline in the UK, but factoring in online and on-demand services the time spent watching content actually increased, according to research house IHS Markit.

The average Britain watched 247 minutes of content a day in 2015, 187 minutes of which was via linear TV.

Within the online viewing segment, the amount of time watching long-form content increased 25.7%.

In terms of overall daily time spent watching TV, Italians topped the heap in western Europe, with an average of 280 minutes. Averaged out across all Italian households, the non-linear average was just 18 minutes.

“Online long-form reached 46 seconds per-person per-day in 2015. As with pay TV video on demand, the dominance of transaction-based services can be pointed to as an inhibitor for growth in this area.”

In Germany, where overall TV revenues were up in 2015, there was an increase in online viewing, but SVOD services are struggling, according to IHS.

“Online services such as Amazon Prime and Maxdome are growing in popularity in Germany, but are somewhat struggling to gain traction,” Sutton said.

Last week, it emerged Vivendi was shutting down its subscription on-demand service Watchever, in order to focus on new mobile TV platform Studio+.

“Over the coming months it will be interesting to see how the German consumer responds to revised television on-demand offering of the new Sky Europe,” Sutton said. “Sky Deutschland has historically not had the same success as its sister company in the UK.”

Spain was behind Italy with an overall average of 234 minutes of daily TV viewing, although that total is down year-on-year and the lowest since 2010. The non-linear viewing totals were up, with short-form the most popular category of content, increasing 21% year-on-year to almost nine minutes day.

In France viewing time was up to 224 minutes a day, driven by both old and young demos, the under-14s and over-50s.