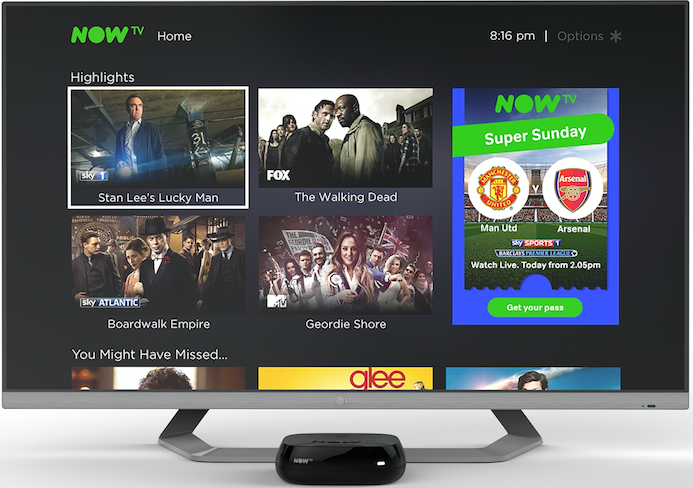 The Now TV Combo is due to launch next month alongside the latest generation of the Roku-powered Now TV Smart Box – which includes a new homepage and frequently updated editorial recommendations.

Sky said that viewers will be able to access up to 35 pay TV and over 60 free-to-air TV channels, alongside Now TV’s over-the top bundles and other apps and on-demand services including the BBC iPlayer, ITV Hub, All 4, Demand 5, YouTube and Spotify.

Now TV Combo customers will be able to choose one from four existing Now TV pay-monthly passes – Entertainment, Sky Cinema, Sky Sports and Kids – and three broadband options will offer connection speeds of 17Mbps (‘Brilliant Broadband’), 38Mbps (‘Fab Fibre’) or 76Mpbs (‘Super Fiber’. The three call package options are: ‘pay as you use’; ‘evenings and weekends’, which gives free calls at these times to UK landlines and mobiles; and ‘anytime calls’, which offers unlimited UK calls at anytime.

“With the Now TV Combo, we’re pushing the boundaries again with the UK’s first contract-free triple play bundle. Plus, our customers will get the benefits of our new Now TV Smart Box that brings together free-to-air and Pay TV shows seamlessly,” said Now TV managing director, Gidon Katz.

“We know people want the freedom and control of a no strings relationship when it comes to choosing their TV, broadband and call package, so the Now TV Combo is the product and service they deserve.”

The most expensive Combo will cost £69.98 for a Sky Sports Month Pass, 76Mbps broadband, pay-as-you-use calls and line rental. The evening and weekends and anytime call packages cost an extra £4 and £8 respectively.

Combo customers will also have to pay a £40 set-up fee for broadband, or £50 for fibre internet, but the Now TV Smart Box and Now TV Hub will both be provided with no charge for postage and packing.

For non-combo customers, the new Now TV Smart Box will be available to buy for a standalone price of £39.99.

CCS Insight analyst Paolo Pescatore described the Now TV Combo launch as a “significant move” as “the battle for the living room intensifies”.

“Sky is the UK market leader and has more exclusive relationships in content than any other provider. Now TV is much more than an entry level product, it’s a great product for people who want premium content without any long term commitments. We firmly believe that the future of delivering video is via the internet and more people are on lookout for alternative ways to sign up to pay TV and multiplay bundles.

“Undoubtedly, Sky will add mobile to its newly created Now TV bundle which will generate further appeal across all demographics. This latest move puts pressure on rivals to step up and to bring truly converged multiplay bundles to the market. Sky is in a unique position to differentiate with its premium content rights in all genres.”

Ewan Taylor-Gibson, broadband and TV expert at uSwitch.com, said: “By offering an alternative to its fixed-term contracts, Sky’s Now TV is advancing on the territory inhabited by the monthly rolling options offered by the likes of Netflix.

“Existing triple play bundles that include TV, broadband and landline often tie customers in for at least a year, so the Now TV Combo is unusual in that sense. One of the biggest flaws of bundled deals is that, if you’re unhappy with one service, it’s often much harder to get out.”