How has binge viewing changed the market for drama?

What is clear is that at an inception and development level, the process has become more creator-driven. SVOD services are keen to indulge passion projects from big-name talent and will also hand greater control to a creative team than a traditional broadcaster or pay net.

“Dramas are much more creator-driven than ever before,” says Michael McGahey, vice president of series at LA-based Marvista Entertainment. “Even traditional cable series are being designed with binge-viewing in mind. Programming is burning off quickly and now that the Pandora’s box has opened, this model is here to stay.”

“Scripted development is probably more creator-driven than it was a few years ago, and has become more niche in terms of genre and subject matter,” adds Red Arrow International’s senior VP of scripted acquisitions and coproduction, Amelie von Kienlin. This makes how you distribute a show much more detailed and nuanced.”

Practically, SVOD also calls for longer stories, and cliffhangers that should drive immediate viewing, not an appointment-to-watch next week. It also, arguably, allows for more nuanced storytelling.

“Binge viewing has had an impact on story arc and character development,” says Ampere Analysis research director Guy Bisson. “It really is easier to carry across more complex characters and stories when you can watch back-to-back in a more movie-like viewing experience, and also ‘catch-up’ for a proper recap.” 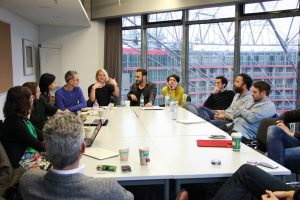 Germany-based TV writer, and member of the Dirty Dozen collective (pictured), Korbinian Hamberger, agrees there is room for more complex stories to be told.

“Creators don’t have to worry whether a viewer might miss one episode or not – because they won’t,” he says. “The result is a more complex character development, highly serialised storylines and the freedom of having a bigger variety of episodes.”

Bingeing series means a glut of serialised projects in the market designed to draw a viewer into a marathon watching session.

Conversely, the big free TV stations in France, Germany and elsewhere have been crying out for more procedurals, and the feeling among the execs we spoke with was that the industry has started listening, with 63% of respondents suggesting this kind of sit-back popcorn TV is making a comeback.

“We are aware of the changes in the demands of the viewers in general such as binge watching, nevertheless, we need to realise that the majority of our target audience in Germany still wants to watch more classical procedural shows,” says RTL’s chief buyer, Jörg Graf.

“There hasn’t been a big change in terms of which stories we can tell, but once we see a high potential in a show we have to ensure that our audience has access to the show apart from a linear transmission. Non-linear distribution has definitely become a must-have.”

Whether scripted or procedural, what all of the above does mean is that talent is kept busy, and by extension is in short supply. Timelines also, paradoxically, get both lengthened and compressed.

With so many partners fighting for the best ideas, straight-to-series orders are more forthcoming, even in the US network world in some cases. “The biggest change is we are now all in the series development business, not the pilot development business,” says Endemol Shine Studios president Sharon Hall.

“It has changed the calendar of our work seasons. Often, the writer’s room has completed eight to ten, or more, scripts before we even go into production. I often find myself ‘missing’ pilots – even though they were not cost-effective nor indicative of what the series will look or feel like – they gave you an opportunity to course-correct. In the direct-to-series world, the scripts and time to prep properly are paramount.”

The global rise of SVOD has also allowed creators to play with formats and run-times. Without the need to break for commercials, or for an episode to last an exact time, the creative team has a newfound freedom. That is also a challenge for a distributor when it comes to selling a show to a traditional buyer.

The length of project is increasingly flexible, and while long-running weekly series will always be in demand, broadcasters are also going for highly marketable, shorter, event series, which vary in episode number.

“The commercial hour or half-hour, the question of the volume of episodes isn’t as relevant as it used to be in a traditional broadcasting environment,” says Patrick Nebout, founder of French prodco Dramacorp.

“Any format goes. The format of a series depends entirely on its story.”

For Jez Swimer, head of development at UK-based Leopardrama, recent developments mean “the need for longer series and finding compelling reasons for a viewer to watch the next episode in a landscape full of distractions, informs a tendency both towards genre shows and to originating highly singular non-genre shows”.

Even assuming a channel does have a great drama series, the concern is it gets lost amid the hundreds of other options in scripted TV. Breaking Bad was a famously slow burner until Netflix allowed viewers to binge the series on SVOD, in turn building a fan base on linear TV. However, the landscape has only got more cluttered since the meth-dealer drama cut through.

Marketing becomes a key challenge in this environment. “In today’s marketplace, social media has transformed how shows are marketed and how viewers expect to consume all media,” says Craig Cegielski, co-CEO, FremantleMedia North America. “Engagement with audiences is key – enabling viewers to be brand champions can help a series break through, and if nurtured correctly, those champions can drive enough passion and awareness to create the next mega hit.”

There may be new tools, but standing out becomes tougher in a cluttered landscape. “You have to cut through a crowded market to generate excitement and engage new audiences around scripted content,” says Katie Keenan, head of acquisitions at British broadcaster Channel 5 and Viacom International Media Networks UK.

“Attribution, visibility and scale are crucial as we found with the recent X-Files reboot, which was supported by a hugely impactful integrated press and marketing campaign.” In this case, it worked, with the first episode of X-Files the highest rating drama ever on Channel 5.

The challenge is creating a strategy that will allow your series to break through the noise when the competition has never been fiercer,” says Harold Gronenthal, executive VP, programming and operations for AMC Global and Sundance Channel Global. “Finding an effective way to market new original drama amidst a landscape with an unprecedented number of series is challenging for everyone, particularly when navigating different distribution platforms.”

The fundamental question for producers and distributors, is whether the array of new opportunities replaces or surpasses those in the old world.

“It seems that the cake is not growing but that it is divided into an increasing number of different players,” says Beta Film managing director Moritz von Kruedener. “Content providers have to become more flexible in all areas in order to combine all creative and financial resources. This is more time consuming, but also offers a whole new world of doing business.”

The windowing rules that held in pre-SVOD times are increasingly redundant. “We are not constrained by any traditional windowing rules as long as the business model makes sense for the entire lifecycle and success of the show,” says Mike Wald, executive VP of international distribution at Sony Pictures Television.

The challenge, then, for distributors is to maximise the number of windows while simultaneously reducing lead times. The latter because once produced, the proliferation of illegal download sites means piracy is a huge threat.

“From a distribution POV we are constantly encouraging our British broadcasters to release holdbacks on their dramas to ensure we are able to offer international licensees the opportunity to view either at the same time or very shortly thereafter,” says Content Television president Greg Phillips. “With the online community divulging spoilers and storylines as soon as shows have aired it is increasingly important to offer this option to our international licensees.”

Bearing out the piracy point, the likes of Fox are now launching new series such as Outcast globally within hours of the US. For smart indie producers, meanwhile, there is both more opportunity, and vastly more competition.

“In many ways [changing consumption habits] have encouraged and even required producers and writers to be much bolder and more inventive in the way their conceive, develop, finance, produce and market their shows,” says Stephen Cornwell, co-CEO of The Night Manager prodco The Ink Factor.

“The downside of that is that it’s more competitive, more crowded and in some ways risky. The upside is that there’s more opportunity for distinct, high quality drama than ever before and more ways to be able to break convention in the way that comes together, gets financed and finds an audience.”

K7 head of drama and digital Dan Whitehead says that market dynamics mean not just that series get burned through faster by platforms and broadcasters, but trends and cycles come and go faster.

“There are still intermediaries, but the importance of any single outlet has diminished,” he says. “This means we’re seeing production driven even more by content trends, rather than market trends. The result is a faster turnaround of bubble trends – such as anthology series, horror series, adaptations of movies etc – as producers rush to capitalise on things to which audiences have responded well.”

Asked about how the market has changed, Bosch producer Henrik Bastin, references a character from one of TV’s great dramas, Slim Charles from HBO’s The Wire: “Game’s the same, just got more fierce.”