Sky has inked a deal with Turner that gives the pay TV operator the exclusive streaming rights to on-demand box sets of the channel operator’s hit shows Adventure Time and Gumball.

The agreement means a raft of programming will be added to the Sky Kids app, including Cartoon Network’s hit toon series Adventure Time (above) and The Regular Show.

Other new shows added to Sky Kids will include the upcoming Powerpuff Girls reboot. There will also be older episodes on the app, with past seasons of The Amazing World of Gumball (below) and classic shows including Scooby Doo, Tom & Jerry and Looney Tunes.

Sky and Turner said the exclusive deal was ‘long term’, and will cover content from Boomerang and Cartoonito as well as the flagship Cartoon Network channel. 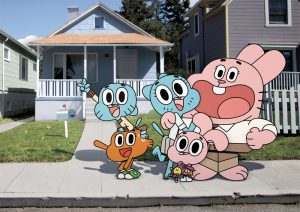 UK-based pay TV operator Sky is beefing up its kids streaming service in the same week that the BBC has rolled out its BBC iPlayer Kids app.

Sky launched its kids app at the end of last month, with 4,500 episodes of kids content, stealing a march on the UK pubcaster, with its 10,000 episode offering.

The pay TV firm said today the Turner deal will help “ensure Sky remains the best entertainment choice for children and their parents in the UK and Ireland”.

Lucy Murphy, head of kids content at Sky said: “Turner produces some of kids’ absolute favourite shows and we are really excited Sky will be the only place they can watch boxsets of The Amazing World of Gumball and Adventure Time.

“We want the millions of Sky families to have the very best kid’s entertainment available whenever and wherever they want to watch, including on the amazing new Sky Kids app.”