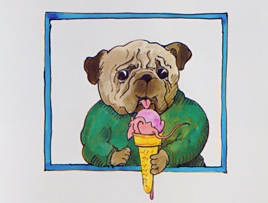 London-based studio Eye Present and Ireland’s Pictor Productions are to coproduced animated content based on a book about a young pug raised by cats.

Eye Present and Pictor have a co-development deal together for Flix, with an option deal now in place with the title’s publisher, Switzerland-based Diogenes Publishing House.

Flix follows a young dog who lives in Cat Town with his feline parents and makes trips to Dog Town to visit his ‘dogfather’.

“Flix is about making the best of your differences – we are all equal and we are all different,” said author Tomi Ungerer, whose daughter, Aria Ungerer runs Pictor. “Flix shows us that with comedy you can overcome any dogstacle.”

Tomi Ungerer is a writer and illustrator who has published for more than 140 books, with Flix first released publicly in 1997.

Eye Present, which is a joint venture of kids TV producer Genevieve Dexter and Squint/Opera, is working directly with Aria and Tomi Ungerer on the adaptation.

“To find the right format and target for this title, we are currently working on Flix as a character and some storylines,” said Eye Present co-chief Jules Coke. “His world is already very clear.”