Sky has launched the Sky Kids App, a new service that allows younger viewers in Sky homes to stream series from Cartoon Network, Disney, CBeebies, CiTV, Nickelodeon and Milkshake, and is moving into original children’s commissioning. 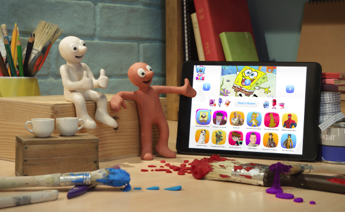 The UK pay TV operator it is working with prodco Aardman on a new version of Morph, a move that represents Sky’s first kids original.

The iconic claymation series was rebooted by CBBC last year, and Sky said it has ordered new episodes for later this year.

Alix Wiseman, head of sales and acquisitions & executive producer, Aardman commented: “Morph is very dear to our hearts and we hope that he and his mate Chas will entertain a brand new generation of viewers on this platform, as they have their loyal fan-base over the past four decades.”

There will also be a live-action series, showing kids how to make and animate plasticine characters.

Sky launched the app this morning, saying it is targeting preschoolers through to nine-year-olds. It allows kids to create a profile and view shows from a 4,000-strong line-up. They can stream the series on smart TVs and connected devices and there are age-related parental controls.

Parents can set up to ten profiles for kids. The app is free to existing Sky subs on the Variety package and above.

Sky’s move will be welcome news for indies, as the BBC has for some time been the only regular UK commissioner of scale in terms of kids content.

Lucy Murphy, head of kids content, Sky, said: “We have worked really closely with lots of children and their parents to design the new Sky Kids app. It means they can watch all their favourite shows in a really engaging way designed just for them. Safety is of fundamental importance so parents will be able to filter what their child watches according to their age.

“Around a quarter of Sky households have children so we know how important it is we give them the very best kids entertainment. That is why we are investing in exclusive new programming starting with family favourite Morph as well as developing future enhancements for the app including even more safety features, live channels and offline viewing.”