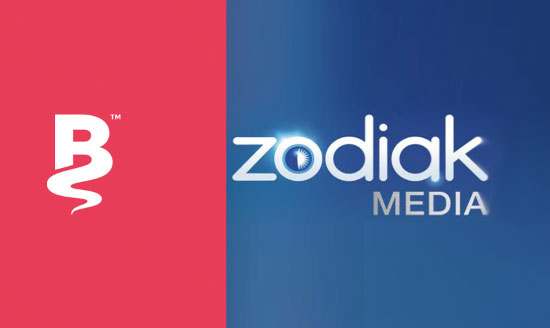 Operating from today, the newly created firm, called Banijay Group, will be 73.8% controlled a new entity housing the stakes of Banijay founder Stéphane Courbit and Zodiak majority shareholder De Agostini Group. Courbit’s LOV Group will control 50.1% of this company, with De Agostini controlling the other 49.9%.

Vivendi will control the remaining 26.2% stake in Banijay, having invested €290 million in cash and subscribed to a pair of Banijay- and LOV-issued bonds.

“I am very pleased to confirm the merger of two such successful and innovative companies,” said Courbit. I have every confidence that this strong group of managers and creative talent will thrive on the global stage. It is my pleasure to welcome Vivendi to our new Group and we look forward to a prosperous future together.”

Mutimer was today confirmed as head of distribution at the merged sales outfit, which will keep the Zodiak Rights branding.

The new group will, with annual revenues of about €1 billion (US$1.1 billion), be the third largest of its kind in Europe, behind FremantleMedia and market leader Endemol Shine Group. It will have 17 operations producing and distributing entertainment, drama, kids, factual and animation. It claims this means it is the largest independent that is not owned by a media giant in the world.

The firm’s programming assets include Versailles, The Secret Life of Four Year Olds, Temptation Island, Popstars, Beat Your Host, 71 Degrees North, Keeping Up with the Kardashians, Fort Boyard, Making of the Mob, Underbelly, Wife Swap, Wild Things, Being Human, Location Location Location and The Girl with the Dragon Tattoo.

“The merger between Banijay and Zodiak Media, two companies of which De Agostini Group has been a shareholder since the very beginning, creates a real leading international player,” said De Agostini CEO Lorenzo Pellicioli.

“Indeed I firmly believe that – thanks to the quality and size of the product portfolio, the geographical footprint, the excellence of the management team and the support of the shareholders – the new group will be well-equipped to compete on a global basis in the creation, production and distribution of television content.”

Banijay CEO Bassetti said the company brought together “teams of leading programming creators, producers and format developers from around the world and a well-established international distribution arm with an extensive catalogue”.

“Our united group has strength in both its talent and assets to deliver a wide and diverse range of winning content across multiple platforms; maximising our global footprint and optimizing our business opportunities,” he added.

For his part, Arnaud de Puyfontaine said Vivendi’s investment was part of a strategy “to invest in companies developing world-class, original programming”.

“Banijay Group combines strong international creative talent with an extremely wide range of television shows and formats,” added the Vivendu CEO. “I am convinced the new merged entity has all the skills and assets to deliver compelling entertainment for multi-platform media audiences.”