Kindle is the prodco founded by Anne Brogan and Melanie Stokes, and makes kids shows including Hank Zipzer, Dixi (pictured below) and Dinopaws. The Lionsgate deal, financial terms of which were not revealed, gives the studio a 25% stake in the London-based producer.

The Kindle investment is the first TV M&A move by Lionsgate UK as it seeks to build its small-screen business, and marks its entry into UK TV production.

“We’re thrilled to be in business with the incredibly talented team at Kindle Entertainment and excited to explore new creative opportunities together as we begin to build our Lionsgate television brand in the UK and look to replicate the success of our film business,” said Zygi Kamasa, CEO of Lionsgate’s European office and the head of Lionsgate UK (pictured).

“Our new strategic partnership broadens and deepens our support of British filmed entertainment, continues the diversification of our business and capitalises on the momentum already established by Lionsgate’s growing worldwide television operations.” 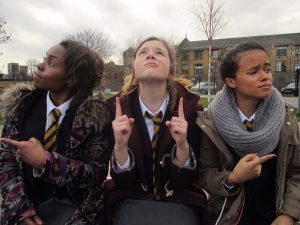 Brogan and Stokes created Kindle eight years ago. The firm specialises in kids and youth-focused content across animation and live-action. It also makes drama and comedy, in which its credits include the Eddie Izzard adaptation of Treasure Island and gritty BBC Three one-off Some Dogs Bite.

The company founders jointly said in statement: “We are delighted as this partnership helps realise our ambitions to grow the company’s primetime comedy and drama portfolio.

“Sharing a combined passion for storytelling that delights, excites and provokes, Kindle Entertainment is keen to utilise Lionsgate’s superlative skills in creating hit shows for the international audience.”

In the US Lionsgate makes and distributes series including Orange is the New Black, Nashville and Mad Men. It has also been active in TV M&A, buying into Debmar Mercury in 2006 and Wicked Tuna prodco Pilgrim Studios this year. The UK business is now on track to increase its TV business.

Lionsgate Television Group chairman Kevin Beggs said: “Zygi Kamasa has already established a strong and distinctive Lionsgate UK film brand, and the Kindle Entertainment investment creates fresh opportunities to expand his portfolio of businesses in one of our most important territories.”