Charlie Ergen is dropping his president title at US satcaster Dish Network, though will remain CEO and chairman. 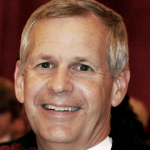 Ergen had retaken his president and CEO posts earlier this year when Joseph Clayton retired. He had previous given up the chief executive post in 2011 to focus on strategic planning.

His replacement as president is Dish veteran Erik Carlson, who has been with the firm for two decades, most recently as executive VP, operations. Carlson will also become COO, with current incumbent Bernie Han named EVP, strategic planning.

Han will remain reporting to Ergen, with Carlson doing the same.

“Bernie’s unparalleled depth as an operational and financial leader will be indispensable as we advance our work on the strategic transformation of Dish, including our entry into the wireless industry,” said Ergen.

“Erik joined us just before our first satellite launch and has consistently demonstrated remarkable leadership across his many assignments throughout our business,” said Ergen. “He has a clear vision for how Dish will deliver the best customer experience and claim share in our category.”

Other changes coming as part of the strategic realignment include Warren Schlichting being promoted to senior VP, programming and media sales, and John Swieringa replacing Carlson as EVP, operations.

Dish shares have suffered this year as subscribers slowly drift away. Market watchers also remain unclear of the firm’s plans in wireless.