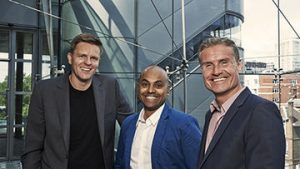 Former Formula One driver David Coulthard, sports presenter Jake Humphrey and BBC Sports producer Sunil Patel (pictured) set up Whisper in 2010, and have since produce shows for the BBC and ITV and international documentaries that have aired on NBC in the US, Sky Atlantic in the UK and BBC World News.

Following Channel’s investment, it will hire a head of television and a “small” development team to leverage existing contacts and develop the firm’s production arm. The firm already has a successful branded content division that creates programming for the likes of Red Bull, UBS, Shell, Casio and Hugo Boss.

For Channel 4, Whisper is its latest indie investment made through its Growth Fund cash pot, which has already been used to acquire minority stakes in Arrow Media, Eleven Film, Lightbox, Popkorn, Renowned Films, True North and Voltage TV.

“Sports production is an important part of the industry and I’m excited that we’re making our first Growth Fund investment in this area,” said David Abraham.

Laura Franses, head of fund at Channel 4 added: “We’re delighted to add our eighth investment to the rapidly expanding and diversifying Growth Fund. It’s great to find a very ambitious early stage company with a skilful exciting management team from a different discipline.”

Whisper recently relocated from Ealing Studios in west London to larger premises in Power Road Studios, Chiswick, London ahead of the planned expansion.

“Our partnership with Channel 4 is a fantastic springboard to showcase Whisper Films’ collective experience, creativity and enthusiasm to the broadcast world,” said Whisper’s managing director Patel.

“We can’t wait to get started on expanding our business to excel in new genres and nurture our valued reputation for distinctive sport and branded content to achieve significant growth in the years to come.”