Amazon’s initial slate of originals was mostly well received, but failed to set the TV world alight. Then along came Jeffrey Tambur cross-dressing drama Transparent, which not only garnered masses of column inches, but also bagged awards and critical acclaim. Some commentators described as “Amazon’s House of Cards moment”.

SVOD service Amazon Prime Instant Video now has a slew of new dramas in the works that it hopes can capture some of Transparent’s Golden Globe-winning glow, including Woody Allen’s first ever TV series, a US version of UK drama Mad Dogs and a TV adaptation of Philip K. Dick novel The Man in the High Castle (pictured).

The latter is based on author Dick’s alternative history novel that considers a world in which the Allied forces lost World War II.

Amazon said the pilot was its most-watched ever (though as with all major SVOD platforms it does not provide numbers). The production team includes David Semel, Frank Spotnitz, David Zucker, Scott Free, Stewart Mackinnon, Headline Pictures and Electric Shepherd.

The show was originally revealed in 2010 as a BBC One coproduction with Headline, Scott Free and FremantleMedia, and was later worked up as a four-part series for US cable channel Syfy. However, Amazon swooped in and ordered a pilot last year after those false starts.

Mad Dogs, meanwhile, is based on the British Sky-commissioned drama about a group of middle-aged friends that find themselves in trouble after a reunion. Sony Pictures Television is a coproducer.

Amazon will also have its first ever half-hour docu-series, The New Yorker Presents. It features stories from the popular New Yorker magazine, and comes from Condé Nast Entertainment and Alex Gibney’s Jigsaw Productions, who coproduced the pilot.

Little is known, meanwhile, about the Woody Allen series other than that it will mark the iconic writer, producer and actor’s first move into TV (aside from 1970s kids series Hot Dog). Allen will write and produce the straight to series project, which will launch simultaneously in the US, UK and Germany.

“I don’t know how I got into this. I have no ideas and I’m not sure where to begin,” said Allen, who is best known for films such as Annie Hall, Blue Jasmine and Vicky Christina Barcelona. “My guess is that [Amazon Studios’ VP] Roy Price will regret this.” How serious the director was being is not yet clear.

Recent research has given Amazon cause for both concern and cheer. Nielsen data shows that four in ten homes in the US have an SVOD service, and while Netflix is the clear leader with 36% of US homes taking it, Amazon Prime Instant Video is now in 13.6% of homes and gaining ground.

The bad news is that, according to Strategy Analytics, Prime users are more likely to use Netflix to access video content. The research house claims that 63% of Amazon Prime subscribers used Netflix in the previous month compared to 59% who used the Instant Video service.

The actual number of Prime subs using Instant Video is not known, as Amazon never breaks out these – or even overall Prime – numbers. The e-commerce giant said earlier this year that paid Prime subs grew 53% last year, without specifying the subs numbers aside from saying there are ‘tens of millions’ of paying customers, which compares with Netflix’s overall 62.3 million. The bulk of these are in the US.

Like its arch rival Netflix, Amazon never gives any viewing numbers or data for its streaming service. 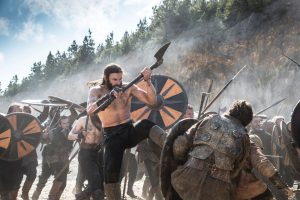 In terms of 2015 acquisitions, Amazon has bought Downton Abbey and Outlander for the UK as well as the soon-to-launch third series of Vikings. Prime subs will also get several dramas from the US AMC channels after striking a deal with their distributor, Entertainment One.

That deal, which covers the UK and Germany, handed Amazon scripted series from AMC and Sundance in the US including Halt & Catch Fire, Turn and The Red Road.

It also gives Amazon upcoming series from those US cable nets, including martial arts drama Into the Badlands.

Amazon has also bought Endemol Shine International-distributed BBC Two series The Fall for the UK. (The series was acquired by Netflix for the US).

On the comedy front, acquisitions include British comedy Catastrophe. With exclusive US rights Amazon will launch under its ‘Originals’ banner there before it hits its UK and German services thereafter. The Avalon-produced and distributed show follows US comic Rob Delaney and Irish comic writer Sharon Horgan (Pulling) as an American-Irish couple struggling to make a relationship work initial lust leads to pregnancy.

Meanwhile, marking the first deal between Amazon and the distribution arm of Starz, the streaming service picked up exclusive US SVOD rights to period drama The White Queen. The show, which was shot in Belgium, is based upon Philippa Gregory’s series of bestselling novels set during the English Civil War: The White Queen, The Red Queen and The Kingmaker’s Daughter.

For its German service, it has picked up a package of BBC Worldwide fare including drama series Doctor Who, Luther, factual epic Planet Earth (which Netflix has also recently acquired ahead of its game-changing blue chip series Our Planet) and kids series Charlie & Lola.

This year it has given second season orders to several of its original kids series.

Creative Galaxy, Annedroids, Gortimer Gibbon’s Life on Normal Street and Tumble Leaf have all been renewed. The quartet of kids series were among Amazon’s first wave of original programme orders.

Amazon is also rebooting 1970s live-action kids series Sigmund and the Sea Monsters. Amazon Studios will produce and pilot a new version on its Prime Instant Video streaming service, having struck a development deal with the creators of the original, veteran producers, Sid and Marty Krofft. The pair will help reimagine the show for modern audience. The Krofft-produced original version of the series went on US broadcast net NBC in 1974.

In terms of kids acquisitions, Amazon has picked up a package of FremantleMedia shows this year, with titles including Kate & Mim-Mim, Team Toon, Alien Dawn, Really Me, The Aquabats Supershow! and Monsuno. It has also taken animated family feature The BFG – Big Friendly Giant, based on the eponymous Roald Dahl kids novel.

Netflix ruffled feathers in the movie world when, last year, it said it was moving into original features and was going to transform the ‘antiquated’ movie windows structure. Amazon Studios has now followed suit.

Its studio has hired independent film producer Ted Hope, who produced films such as Crouching Tiger, Hidden Dragon, the sequel of which is, ironically, going out exclusively through Netflix.

Hope will lead a new division, Amazon Original Movies. Amazon noted theatrical releases typically took between 39 and 52 weeks to premiere on SVOD services, but that its new model would mean movies hitting Amazon Prime Instant Video between four and eight weeks after their US cinema debut.

“We look forward to expanding our production efforts into feature films. Our goal is to create close to twelve movies a year with production starting later this year,” said Roy Price, VP, Amazon Studios (pictured right).

“Not only will we bring Prime Instant Video customers exciting, unique, and exclusive films soon after a movie’s theatrical run, but we hope this programme will also benefit filmmakers, who too often struggle to mount fresh and daring stories that deserve an audience.”

Unlike Netflix, Amazon’s global footprint is small, spanning only the US, UK, Germany and, since late last year, Austria. This means its content is increasingly finding a new home on TV channels and other SVOD services around the world. In some cases, it is finding its way onto services competing directly with Netflix.

In Australia for example, Nine Network and Fairfax Media’s SVOD service Stan has bought Transparent and Mozart in the Jungle, both of which are sold internationally by SPT.

In Canada, another SVOD newbie, Shomi, has acquired exclusive local rights to a raft of Amazon’s original programming from Sony. It has acquired Transparent as well as comedy series Alpha House and Betas among others.

This means Bell-backed Shomi boasts rights to a slate of shows that not yet gone out on traditional linear TV in Canada. Accordingly, the streaming service is marketing the Amazon content under the ‘Shomi Exclusives’ banner.

In free TV, Bosch has also been shopped to Australian pubcaster SBS, which will debut it this July on its flagship SBS One channel. In the US, UK and Germany, Amazon claimed that Bosch delivered it the biggest debut weekend yet for one of its originals (again it did not break out any supporting data).

Elsewhere, Modern Times Group’s Scnadinavian on-demand service Viaplay in Sweden has also picked up Amazon original drama Mozart in the Jungle from SPT. The pilot of the show was penned Jason Schwartzman (Rushmore) and follows a New York classical musician and Amazon greenlit a second season of the show earlier this year.

Over in pay, France operator Orange has inked a volume deal with Sony that included Transparent and Mozart in the Jungle, and on the kids sales front, Discovery Kids Latin America has acquired the first two seasons of Amazon’s hybrid animation kids original Annedroids.