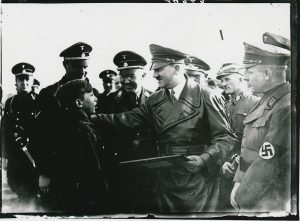 NGCI will put the two-part doc out on its international channels later this year. It will also go out on Nat Geo in the US.

The doc is sold by France-based distributor Zed, which struck the Nat Geo deal. It documents the final year of German Chancellor Adolf Hitler’s life and marks the 70th anniversary of the end of the conflict.

Hitler’s Last Year was produced by Cinétévé for France 2. It uses remastered, restored, recolored archives and with and rare images to retrace the events that ended the war.

Hamish Mykura, executive VP and head of international content for NGCI, said: “This is a beautifully made, visually stunning film that provides a shocking and in-depth insight into the tactics employed by both sides in the final months of the war.

“It is an exceptional and gripping film that will be a fitting commemoration of the war’s end.”

Céline Payot Lehmann, head of distribution and acquisitions at Zed said, “This film proves that there is still a place on primetime television for well written and high-quality specialist factual. Director Korn-Brzoza is an amazing storyteller who manages to bring new light to a well-known chapter of history.”