Sky swoops for Warner Bros.’ The Flash and Forever

Both series are distributed by Warner Bros. International Television Distribution. The Flash (left) is a spin-off of another superhero series Arrow, which also goes out on Sky1.

It will debut on The CW, which also has Arrow, as part of the US broadcast net’s fall schedule. Warner Bros. TV, DC Comics and Berlanti Productions produce the show.

Forever (right, below) is a supernatural procedural/romantic drama hybrid that Warner is positioning as a natural successor to The Mentalist, which aired on Channel 5 in the UK. It follows an immortal New York medical examiner.

The series, which is produced by Warner Bros. TV and Lin Productions, will debut on ABC this autumn.

Adam MacDonald, director of Sky 1 HD said: “The Flash is a natural partner to Arrow and is sure to be popular with families who are fans of the comic book format and the mesmerising otherworldly drama, Forever, completes a double of quality series that I’m proud to be airing on the channel.”

Separately, Sky has acquired another big-ticket US series. The Michael Bay exec-produced series The Last Ship (pictured, below), days after it sold to Asian pay channel WarnerTV.

The ten-parter is for US cable net TNT, which has already greenlit a second, thirteen-part, season. It follows events after a global pandemic that leaves th 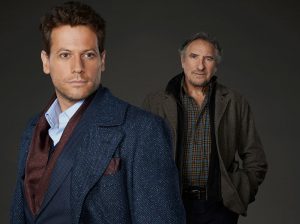 e USS Nathan James as a ship housing some of the remaining survivors.

It has greenlit Wild Things (WT), a physical gameshow in which couples undertake challenges on a giant woodland obstacle course while dressed as cute wild animals. IWC/Mad Monk & GroupM Entertainment will coproduce the show.

On the drama side, Sky has commissioned Agatha Raisin and the Quiche of Death, a new detective drama starring Ashley Jensen (Extras) and produced by Mammoth Screen and [email protected] TV.

Sky Vision will sell the 1x120mins show internationally. It will debut as part of Sky’s Christmas line-up.