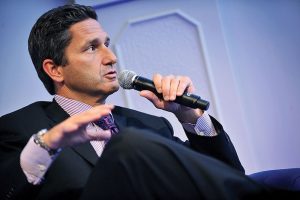 Announcing the deal this morning, Liberty said it had acquired the 259.8 million ITV shares from BSkyB at £1.85 per share.

Sky said it intends to use the proceeds for “general corporate purposes”, though analysts have suggested it could be linked to the potential takeover of Sky Deutschland and Sky Italia.

“This is an opportunistic and attractive investment for us in our largest cable market. ITV is the leading commercial broadcaster in the UK and we’re excited to be shareholders,” said Liberty CEO Mike Fries (pictured).

Liberty said that it does not now intend to build on its minority stake by making an offer to acquire ITV.

The deal marks Liberty’s latest major investment in the UK market following its US$23.3 billion buyout of Virgin Media, which closed in June 2013.

The firm this year also agreed to acquire the 71.5% of Dutch cable operator Ziggo that it doesn’t already own for €35.74 per share – valuing Ziggo at roughly €10 billion.

While the Ziggo deal is still undergoing regulatory scrutiny, Liberty said that no regulatory approvals are required for its level of investment in ITV. It is paying for the ITV deal through a loan linked to a hedging transaction that will be secured by ITV shares and existing liquidity.

Sky bought 17.9% of ITV in 2006 for £940 million. It sold off 10.4% of its stake for £196 million in 2010 after the Competition Commission ordered it to reduce its interest in the business. The latest share sale leaves Sky with shares accounting for roughly 1% of ITV.