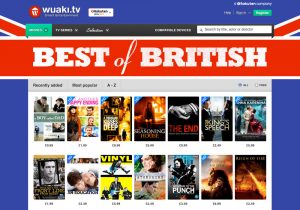 Streaming and download-to-own service Wuaki has added a raft of British movies to its service in the UK.

Wuaki, part of the Japanese Rakuten group, has inked deals with several distributors including Metrodome, Kaleidoscope Entertainment, The Movie Partnership and Content Media to add the UK features, which will be marketed under a ‘Best of British’ banner.

The line-up spans classic and contemporary films. Classic titles include Lawrence Of Arabia, The Ipcress File and A Hard Day’s Night. Modern movies include The Borderlands and The King’s Speech.

Wuaki said it is working to add more British titles to the movie line-up and that the UK films differentiate it from the competition in the UK, where it lines up against Netflix, Amazon, Blinkbox and others. The OTT service has embarked on a similar initiative in Spain, where the company was founded before being acquired by Rakuten in 2012.

“We are working on more deals of this kind as no other streaming service is focusing on the best of British cinema in this way, and we believe it will really help set Wuaki.tv apart in the market,” said Simon Homent, UK content director at Wuaki.tv.

The streaming service is currently available in the UK and Spain, but said last month that it will launch in France, Germany and Italy before the end of the year as part of an expansion plan that will see it roll out in 11 European countries by the end of 2015.