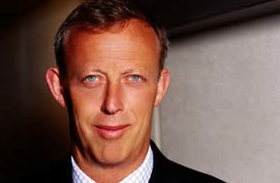 Entertainment One has hired Stuart Baxter as president of eOne Television International and he will replace Peter Emerson who is leaving the producer and distributor.

Baxter was at Sony Pictures Television in London for nine years until 2012 and will be based in London in his new role.

Emerson has been at eOne since it acquired his distribution business Oasis International in 2008. He recently outlined plans to relocate back to Toronto from London, where he has been based in recent years.

Baxter will report to eOne Television CEO John Morayniss who said: “Our dynamic international TV business has boomed over the past several years; greatly broadening our abilities through more partnerships with leading networks and top producers and expanding our reach with more people on the ground around the world. Stuart’s extensive experience and track record of success in broadcast, production and sales complements our overall strategy and vision and will certainly drive the division’s next stage of growth.”

Baxter, who was at Warner Bros. before his stint at Sony, will oversee TV sales, acquisitions, coproduction ventures, production financing and strategic partnerships, across the division’s offices globally.

He said: “eOne’s ability to offer content creators a major financial contribution towards their projects, broad international expertise and access to a very robust international infrastructure in the industry is unique. There is so much potential as we focus on growth in the European market and with emerging talent around the world.”

Speaking about his departure from the company, Emerson (right) said: “After six great years with eOne, building its international TV business and a dream team from scratch, the entrepreneur in me felt that it was the right time to move on. I pass the baton on to Stuart who brings a new bag of tricks, and I know he will continue to build on our success and momentum.”

Morayniss added: “Since joining eOne, Peter has led the team with vision, passion and exceptionally charming wit. We thank Peter for his leadership and commitment and wish him the best as he transitions to his next endeavour.”