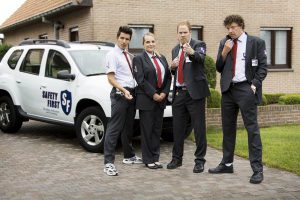 ety First, a new comedy format from Shelter, the prodco behind Benidorm Bastards.

The show is a feelgood comedy set in a security company. It has been a hit on Belgian free-to-air broadcaster VTM.

“For a long time, I thought our shows were lucky shots. But now Safety First did it again: this is not a coincidence anymore”, said Shelter boss Tim van Aelst.