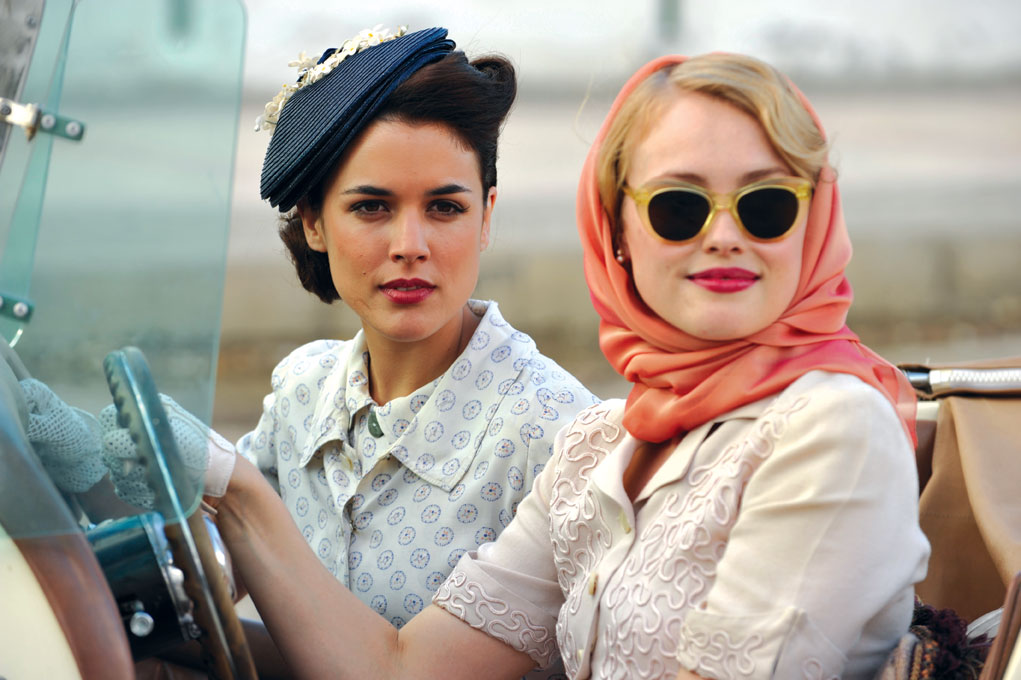 The Time in Between

Spain’s crisis has forced TV producers to seek international business. Local fiction continues to dominate Spanish primetime, but the dramatic fall in investment in TV advertising has obliged broadcasters to cut their budgets for originals. Creating virtue out of necessity, an increasing number of drama producers are looking beyond Spanish border and beginning to reap the rewards of international ventures. A growing global demand for Spanish TV fiction has emerged, reports Emiliano de Pablos.

For years, the international market was of little concern to the Spanish TV production sector. The producers’ business models were based on returns from the solid local TV market. The economic crisis has completely changed the picture.

TV advertising in Spain, in recession since 2011, continues its freefall: after plunging 19% in 2012, it shrank a further 12.8% during the first half of this year. Broadcasters are slashing drama commissions and budgets and the lack of local financing is seriously damaging the local TV industry.

Since 2011, after the Spanish TV market consolidation, when RTVE, Mediaset España and Atresmedia (formerly Antena 3 Group) became the only three nationwide broadcasting groups, the number of possible business partners for the 200 active Spanish indie TV production companies has been significantly reduced.

“We decided to look for business outside Spain last year, since the local market was shrinking,” says Ramón Campos, of Bambú Producciones, one of Spain’s highest-profile TV drama producers.

For Bambú, the Beta Film-distributed period series Grand Hotel, broadcast by Antena 3 and acquired by US VOD service Hulu and the UK’s Sky Arts among others, was a valuable calling card in the international market.

One year later, the company has already closed initial international agreements. With details still undisclosed owing to confidentiality clauses, Campos says: “We have reached a deal with a US studio to write a series pilot and in the UK we are developing a project for a TV broadcaster that will be produced in Spain. We are also preparing some projects for development in Mexico.”

“Expansion outside of Spain has become almost essential for local producers,” argues María García-Castrillón, head of fiction sales at Boomerang TV Group. In 2008, British venture capital fund 3i took a 40% stake in Boomerang. As part of the company’s subsequent international growth, it opened offices in Italy in 2010. It’s scripted series Old Bridge’s Secret, an audience hit for Antena 3, was also a success in Italy for Mediaset’s Canale 5. Now, Boomerang is looking into the possibility of coproducing an Italian adaptation.

One of Spain’s biggest TV outfits – it produces the local versions of primetime entertainment formats including The Voice and Top Chef – Boomerang is already going for the English-language international drama coproduction market through its Galicia-based arm, Portocabo.

The production of the 52x24mins teen comedy series The Avatars, which sees Portocabo team up with Italy’s Fly Distribuzione TV and Brave Film, marks a pioneering moment for the Spanish TV market. The show is a new version of the original Italian TV series E Band, with Disney Channel-style production, combining global market ambitions with low production costs. Shot in Madrid, the series blends young American actors with Spanish crew. “Even before the economic crisis, the Spanish TV industry could boast of high production levels and costs that were lower than those of other big European countries,” says Alfonso Blanco, Portocabo’s general manager.

“Everybody in Europe is interested in producing TV series with international appeal. Coproduction represents a door to the future that needs to be opened,” he adds.

Onza is the distribution division of the recently-launched consultancy, management and media investment company Onza Partners, and makes its international market debut at MIPCOM, co-distributing The Avatars alongside Boomerang.

With an undisclosed, but modest, budget Avatars has been financed by presales to Disney Channel Italy and RAI Kids. Its producers are in advanced talks with Disney Channel in Spain and a German deal is also being negotiated at press time. “Many Spanish producers are going abroad, not only to sell TV content but also to coproduce. It has become a strategic priority,” says Onza Distribution’s Gonzalo Sagardia.

Onza has rapidly compiled a 5,000-hour TV catalogue that includes TV fiction from Spanish prodcos including Videomedia, Veralia and Plural Entertainment. The company’s particular focus is Latin America and the US Hispanic market.

Also targeting the Latin American TV market is Grupo Secuoya, a new Spanish media outfit led by entrepreneur Raúl Berdonés, with backing from the N+1 investment fund. It will invest up to €20 million over the next few years in the production of TV content for the region, including TV fiction programming. Secuoya will focus on Colombia, Chile, Peru and Mexico to meet the growing demand from the increasing number of digital channels. Secuoya’s Spanish TV fiction arm, Doble Filo Producciones, had a standout debut at the start of September in Antena 3’s primetime with dramedy Vive Cantando, which took an 18.7% audience share.

Another way to build a TV production business in these straitened times is by building alliances with powerful international groups. Last January, Madrid’s La Competencia, a former FremantleMedia partner in Spain, inked a five-year exclusive joint venture with Mexican broadcaster and media giant Televisa for the development, financing, production and distribution of TV formats, along with other original Competencia programming, including TV dramas.

“Many foreign territories are now preparing or looking at the possibility of local adaptations of comedy Caught with My Pants Down,” says La Competencia co-founder Javier Pérez de Silva of one key comic title.

DLO was making headlines of its own last month when it was acquired by Banijay, a deal that moved the French super indie into the Spanish scripted realm and recognition of the increasing international value of Spanish content.

“Although the Spanish TV market is now going through a very serious crisis, the creativity that brings is very interesting,” says Toni Sevilla, Mediaset Spain’s head of fiction.

However, like other Spanish TV production groups, Boomerang’s greatest international achievements to date have been in the territory of scripted format sales. In August, it announced an outstanding deal for the Spanish TV drama industry: the acquisition by NBC of the US adaptation rights to Boomerang’s police comedy Mum Detective, which will be produced by Warner Bros. TV. “This is the first time a Spanish TV drama has passed the filter and reached the pilot stage in the U.S. English-language TV market,” says Boomerang’s García-Castrillón.

With a third season already produced, the first two have been aired on public broadcaster TVE’s La 1. A Russian adaptation of Mum, produced by Startmedia Film, debuts September on Channel One. A Mum forerunner, the US Hispanic version of Boomerang’s youth series Physics or Chemistry, was also launched Stateside last year by Hispanic net Telemundo.

More Spanish TV fiction format deals have been recently signed by international TV players. In France, FremantleMedia will produce an adaptation of La Competencia’s Caught with My Pants Down this autumn. In Spain its second season wrapped successfully in July winning Antena 3 a 17% primetime average share.

Last summer, Italy’s Palomar and RAI Fiction started shooting the Italian adaptation of Filmax’s teen TV series The Red Band Society for RAI Uno. Band was also optioned for the US in 2011 by ABC. Another Boomerang and Atresmedia format, fantasy dramedy A Normal Family, is playing successfully on Fox in Turkey.

“Spanish TV cop thrillers and mystery dramas go down well with European audiences; comedies do better in Latin America,” Gonard says. “In our experience, both formats and original productions sell equally well. However, the sale of formats is much more interesting for producers since it enhances their company’s corporate image.”

Returns from the international market for Spanish TV fiction offer a large margin for growth, as currently “they can recoup between 10 to 15% of production costs,” says Gonard.

It is increasingly hard to come by, but a successful performance in Spanish primetime serves as a launch-pad for international sales. That’s what Boomerang and Antena 3 are hoping for from the autumn release of the long-awaited epic drama The Time in Between, one of the highlights of the Spanish TV 2013-14 season.

Caught With My Pants Down

Based on María Dueñas’ best-selling novel of the same name, Time centers on a young seamstress who discovers love and becomes embroiled in espionage in the 1940s in Tetuan, a Spanish enclave in Morocco. “We have very high expectations because the book did extremely well,” says Sonia Martínez, head of fiction at Atresmedia. The novel sold almost two million copies in Spain and has been published in over 50 countries.

“Our TV dramas are produced to be broadcast on Spanish primetime. It’s true that they are usually longer than dramas from other countries, but we edit shorter versions for international clients,” says José Antonio Salso, Atresmedia’s head of acquisitions and sales. Global sales of Time kicked off in Cannes at MIPCOM.

Industry watchers have implored the broadcasters to put their weight behind locally-produced drama series. “Local fiction remains the axis around which TV programming in Spain revolves,” says veteran TV analyst Eduardo García Matilla. “Channels should make an effort to maintain their commitment to certain levels of fiction production, and not give in to the temptation of low-cost programming, as this does not generate business.”