France-based producer and distributor Cyber Group Studios has announced a raft of programme sales off the back of MIPCOM and MIPJunior. 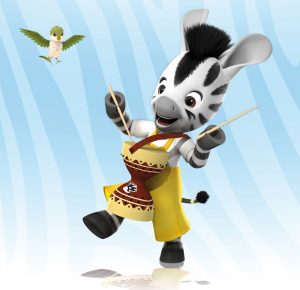 US Hispanic broadcaster VME TV has acquired 104x11mins animated series Zou (pictured) and other buyers include Italian public broadcaster Rai. These deal follow recent sales to broadcasters including Super RTL in Germany and Mediacorp in Singapore.

Cyber has also sold 78x7mins series France Télévisions series Mademoiselle Zazie to Disney in Italy, VRT in Belgium, TV2 in Norway, CT in the Czech Republic and Canal Panda in Portugal. The distributor launched the series at MIPCOM after its August launch on France 5.

There were also new deals for wolf cub toon Tales of Tatonka. New deals for the 52x13mins series include sales to SVT in Sweden, TRT in Turkey, RSI in Switzerland and YLE in Finland.

Rounding out the market deals, Cyber has shopped 78x7mins stereoscopic 3D series Cloud Bread to Canal+ in France, CT in the Czech Republic, TG4 in Ireland and E-Vision in the UAE.